Defence minister Mariusz Blaszczak announced the development via social media on 20 October, accompanied by images of a General Atomics-owned Reaper sporting a Polish air force checkerboard insignia on its tail. 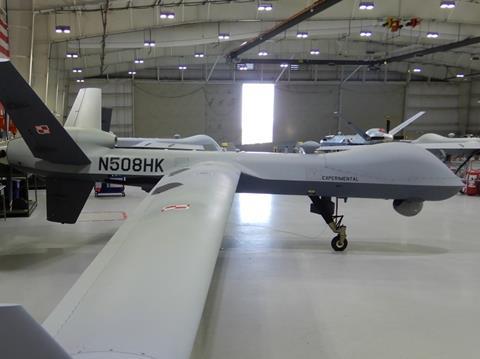 Two Reapers will be provided via $70.6 million deal

“This is a bridge solution. We will use it until we acquire our own unmanned reconnaissance system,” Blaszczak wrote on Twitter, with Warsaw intending to purchase MQ-9Bs.

Poland will operate its leased MQ-9As equipped with a radar, electro-optical/infrared sensor for imagery intelligence, and for signals intelligence tasks.

In mid-September, the first Polish air force operators and technical personnel completed their training on the TB2 in Turkey, and first deliveries are scheduled to be made this month.

The US Air Force from May 2018 deployed two Reapers to Miroslawiec air base in Poland, as a part of a 52nd Expeditionary Operations Group detachment. The service said the aircraft were employed to promote security and stability in the region and to increase the overall capability and readiness of NATO allies and partners. The aircraft were in July 2019 transferred to operate from a Romanian base.