Delta Air Lines hopes to speed up the redevelopment of terminals 2 and 3 at Los Angeles International airport, with an eye on completing the project up to two years early.

The Atlanta-based SkyTeam Alliance carrier is pushing LAX operator Los Angeles World Airports (LAWA) to speed up construction of a secure connector between terminal 3 and the Tom Bradley International Terminal by two years, completing what is now final element of the $1.86 billion programme by 2021 instead of 2024, a presentation to the operator's board earlier in April shows.

The connector is the last major passenger facilities element of the works, which includes renovating terminal 2, rebuilding terminal 3, and building new consolidated ticketing and security screening facility, to reach substantial completion under the timeline in the presentation.

Delta outlined a 2024 completion date for the project in the timeline it released in early 2017. 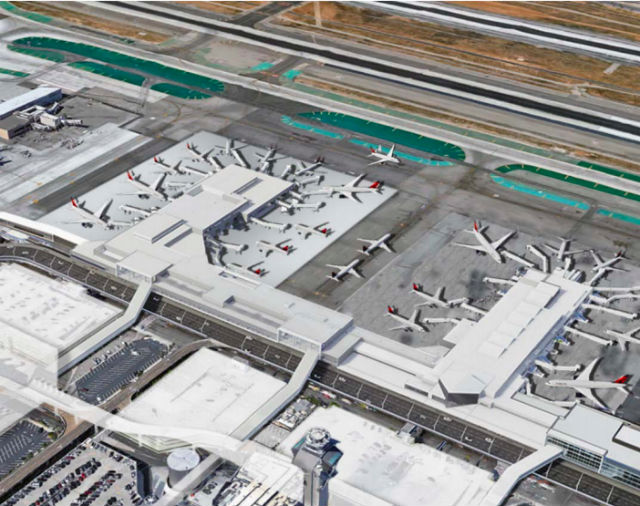 The configuration of the connector, one of several pending issues facing the project, has been finalised, representatives of LAWA told the board on 5 April. Other outstanding points include utility relocation and passenger circulation in the international terminal during construction and with the connector.

LAX officials aim to present final plans for the connector to the board later in the second quarter, they say.

Delta moved to terminals 2 and 3 at LAX in May 2017, after reaching a landmark deal to redevelop the facilities in 2016. The shift increased the airline's gate count at the airport to 23 and enabled it to improve its operations there.

Major terminal 2 and 3 work is scheduled to begin on the new central ticketing and security facility, and terminal 3 concourse later this year. Demolition and reconstruction of the terminal 3 satellite, and renovations to the terminal 2 concourse will begin in 2021.

Construction on the terminals, with the exception of the connector, is scheduled for completion by November 2022, the board presentation shows. Apron paving will continue into 2023.

Delta will have 27 gates at LAX, the most of the US big four, when the project is complete.

American Airlines, currently the largest carrier at LAX, has preferential access to 19 gates, a remote regional terminal and shared use of gates in the Tom Bradley terminal; Southwest Airlines has 12 gates in terminal 1; and United Airlines 22 gates in terminals 7 and 8.

LAX is notoriously gate tight, with executives from all of the major carriers saying their growth ambitions are checked by lack of access to gates.

The airport is building a new 12-gate midfield concourse that is due to open in 2019, and is in talks with United and other carriers about a possible new terminal 9 east of the existing terminal complex.

Delta was not immediately available for comment on the project.