The US Air Force needs at least 120 combat-coded next-generation bombers and another 54 for test, training and attrition reserve, which is far more than the 80 to 100 the service intends to buy, according to retired Lt Gen David Deptula, dean of the Air Force Association’s Mitchell Institute.

During the release of his “Beyond the Bomber” report 10 September, Deptula said based on the current national security strategy, the air force requires at least 12 “long-range sensor-shooters” per aerospace expeditionary force, of which there are 10 today. The service then needs approximately 24 more aircraft for test and training activates at home and about another 30 aircraft are required as back-up inventory to replace combat losses, justifying a 174-bomber production run.

“If you’re going to buy less than that you’re going to have to accept the risk that comes with it,” he says. “Understand, we might not get that number. But I’m giving you that as a logical, valid number based on a military requirement that ties directly to our national security strategy.”

The force number was offered in answer to comments at a congressional hearing this week that the service’s 80 to 100 Long-Range Strike Bomber procurement figure is too low.

“I think the number is potentially going to be much larger than that,” Mark Gunzinger of the Center for Strategic and Budgetary Assessments said at the hearing. “But that's a 2020s decisions. Of more importance to me is how quickly can we feel this force?” 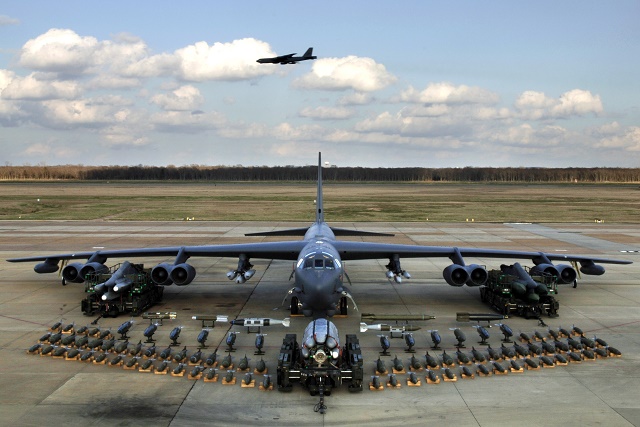 Deptula, a principal attack planner during Operation Desert Storm in 1991, of which bombers were a critical component, says the air force must buy “as many as [LRS-Bs] possible and as quickly as possible” – a sentiment also expressed by the three witnesses at the congressional hearing.

He says last year the air force procured fewer new aircraft than at any point in its history; fewer even than the US Army and Navy.

“We’ve got to stop this dribbling and drabbling,” he says. “I know it results in a bow wave of spending right up front, but over the life of the programme it really saves you money.

“We haven’t just got a geriatric bomber force, we have a geriatric air force. Period. Dot. The overall average age is over 25 years.”