DGA's new Rafale testbed to be delivered by year-end

French defence procurement agency DGA is to receive a Fokker 100 by the end of 2015, modified to allow for systems testing of the Dassault Rafale fighter.

The aircraft was displayed for the first time during the Paris air show (15-21 June), ahead of a planned delivery to the DGA’s CEV flight-test unit in Cazaux at the end of the year and the start of flight-testing at the beginning of 2016.

“When these systems are being developed they can work on the ground, but when installed on an aircraft you can start to see problems,” Claude Chenuil, director of flight-testing at DGA, tells Flightglobal.

The Fokker is intended to replace the Dassault Falcon 20, seven of which are currently operational out of what was once a 14-strong fleet, with a further four expected to retire once the Fokker begins operations.

The Fokker differs from the Falcon in that multiple systems can be integrated for testing simultaneously, so the time between flights is reduced, Chenuil says. He adds that the plug-and-play style of the Fokker modification will enable racks of electronics to be rolled on and off as required to reduce the time for modification.

“It [the Falcon] was dedicated to a single system, but because the Fokker is larger the plan is to carry out different tests at the same time,” he says.

However, the Falcon will still be used for the foreseeable future because it benefits from being able to carry out stall testing, Chenuil says, adding that the Fokker will “replace 90% of the Falcon 20”. 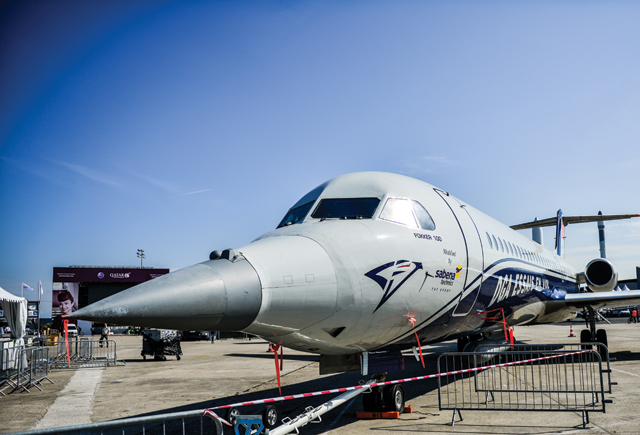 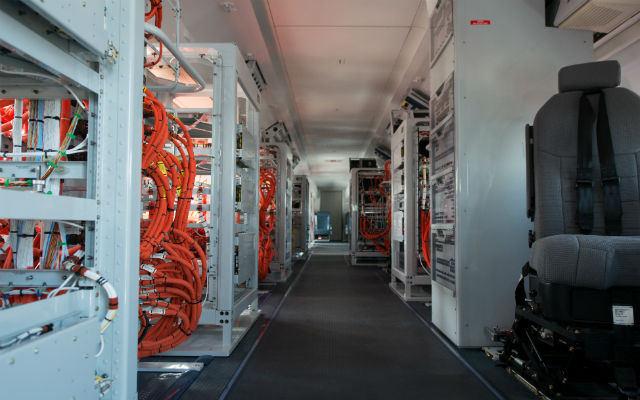 Although the aircraft is 25 years old, Chenuil claims that there are still years of operational life in the Fokker 100. Flightgobal’s Ascend Fleets database shows that the aircraft was built in 1990 and has carried out 35,000 flying hours.

Since being delivered for the DGA role in 2013, the aircraft has been modified by Sabena Technics, and is equipped with a Rafale nose section that houses the fighter’s Thales RBE-2 active electronically scanned array radar and front sector optronics equipment, as well as a Reco NG targeting pod beneath its fuselage and MBDA Mica air-to-air missiles.

The aircraft will not be used for live fire testing, but for testing the seeker capability of the missiles, Chenuil says.

He adds that some 80% of the development testing of systems will take place on the Fokker, followed by testing on a Dassault Mirage 2000 before it transitions to the Rafale for integration testing ahead of operations.

Sabena is in the final stages of making the aircraft compliant with its EASA certification ahead of delivery, Chenuil adds.