Azerbaijan’s Silk Way West Airlines has reached an agreement with Rolls-Royce under which the manufacturer will supply replacement engines for the cargo carrier’s RB211-powered Boeing 747 fleet.

The agreement – covering the supply of replacement engines for five RB211-powered jets – was unveiled at the Dubai air show.

At the time of Silk Way’s decision to order Boeing 777Fs earlier this year, its 747 fleet was listed as comprising 12 aircraft – of which seven were -400Fs. 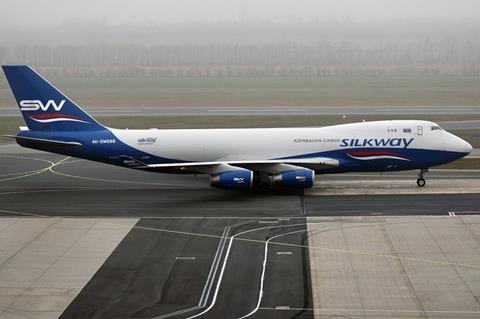 Silk Way has several 747-400Fs fitted, like this one, with Rolls-Royce RB211 engines

But it also lists Silk Way as the sub-lessor of two other RB211-equipped aircraft operating on behalf of Russia’s Sky Gates Airlines. Silk Way has yet to confirm whether these aircraft complete the line-up of five covered in the support deal.

The remainder of Silk Way West’s fleet is made up of two more 747-400Fs, both with Pratt & Whitney PW4000 engines, and five 747-8Fs with General Electric GEnx engines.

“[The carrier] will be able to successfully realise its business strategy regarding the planned fleet renewal,” says Silk Way Group president Zaur Akhundov.

Silk Way West will benefit from a minimum engine life of 20,000 cycles for the next five years.

“Utilising existing engines to provide them with a cost-effective way of maintaining their fleet is an efficient and logical solution to supporting their operations until 2026,” says Rolls-Royce civil aerospace chief Chris Cholerton.