As top Aerion executives meet with Dubai air show attendees, the aspiring supersonic business jet manufacturer is continuing to search for a US assembly site for flight-test and production aircraft.

The selected location will form the “new home of Aerion Corporation”, says the company.

Its production system is taking shape ahead of a scheduled first flight date in 2021 and entry into service in 2023.

“The need is there. Aerion technology has been proven in test flights with NASA. Together with our customers we will make history with civil aviation’s fastest and certainly most exciting aircraft,” says Aerion chief executive Doug Nichols, who is attending the show with Aerion co-chairman Brian Barents and chief commercial officer Ernie Edwards.

The first flight date is two years later than the company planned only a year ago and it still faces several questions about the design.

In fact, selection of a final assembly site is one of several tasks on the Aerion to-do list. 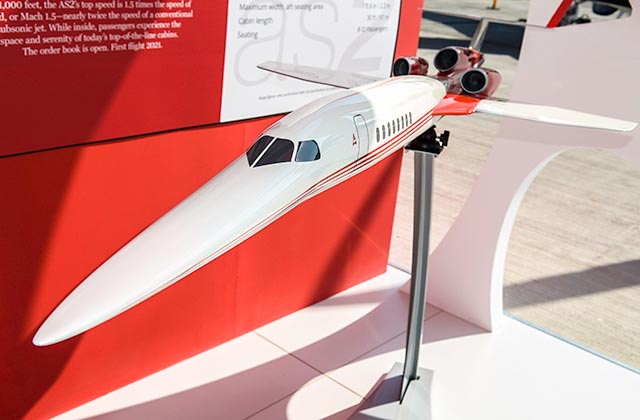 Last year, the company partnered with Airbus Defence and Space to collaborate on design and certification issues.

The Airbus commercial unit is likely to produce major component assemblies for the Aerion aircraft in Europe, which would be shipped to a final assembly site near a US deepwater port.

Another item still to be resolved is the selection of the supersonic aircraft’s jet engines. The original Aerion concept envisaged an aircraft powered by two Pratt & Whitney JT8Ds.

But that plan was dropped after the International Civil Aviation Organization (ICAO) adopted new noise regulations in 2014. When those standards take effect in 2020, they will rule out existing low-bypass engines as too noisy during take-off.

Aerion must select a new design in the 16,000lb-thrust (71kN) class. However, the supersonic application requires a core size normally associated with a much more powerful commercial engine, so designs in ranges up to 30,000lb-thrust are in consideration.

Aerion also is seeking regulatory relief. Last month, Barents said the company had entered discussions with the US Federal Aviation Administration and ICAO.

The goal is to create a separate noise standard for supersonic aircraft. The FAA and ICAO already use a sliding scale for noise emissions, depending on the size of the aircraft involved. Aerion wants to expand that flexibility on noise standards to consider the speed of the aircraft and the economic impact of such regulations.