Beechcraft Defense's AT-6 Wolverine might soon have a launch customer, with a letter of offer and acceptance for six light-attack turboprops being prepared for the government of Iraq.

In partnership with the US Air Force, Beechcraft intends to offer Baghdad six aircraft initially, with options for more in increments of six. That offer is likely to be delivered next month. The US State Department approved a possible deal for up to 24 aircraft in May, and if accepted, Iraq could become the first AT-6 operator.

The company has been searching for a launch customer for several years, and has already produced three examples for development and display at its own expense. Bartlett says securing a launch customer will also begin the process of military type certification, which would make it more attractive to foreign buyers.

Beechcraft has already been eyeing type certification through a new USAF initiative where companies can self-fund the process. Beechcraft and its sister company Textron AirLand will be attending an 18 November air force industry day regarding the Non-DoD Military Aircraft Airworthiness Accreditation programme, offering first to submit the Scorpion and then perhaps the AT-6.

“It’s really a great step on the part of the air force to help companies like us, where we have two airplanes that we invested in at our own expense, and get some help getting them out to market,” Bartlett says. He says the first production-representative or "P-1" Scorpion will be ready to begin certification next year, while the first prototype continues its well-publicised marketing campaign. 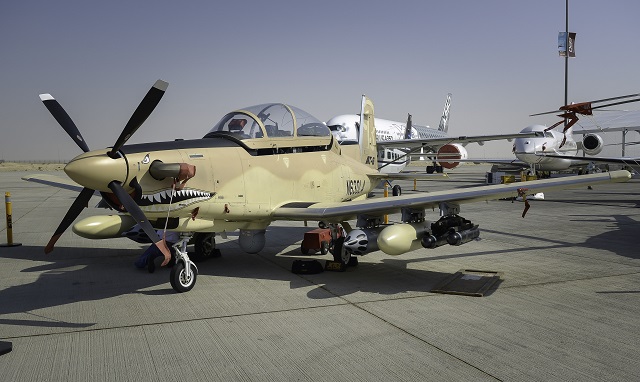 The company sees good prospects in the light-attack market globally and in the Gulf, yet admits it came late to the marketplace as competitors like the Embraer A-29 Super Tucano and IOMAX Archangel gain ground. Bartlett says the US services are also taking notice, because their high-end combat aircraft are ageing out faster than planned, and as the replacement Lockheed Martin F-35 won’t be delivered in the time frame or rate needed to fill those gaps.

“Our objective was to make something that is relevant, appropriate and affordable for the kinds of fights we’re in around the world,” he says. “There’s no air threat over Iraq and Afghanistan. We’re just just wearing our our [Boeing] F/A-18s and [Lockheed] F-16s by using high-end equipment for a task that does not require air-to-air capabilities.”

The AT-6 has been integrated with 15 weapons, including laser-guided rockets, missiles and bombs, and now Beechcraft is looking to add Textron Systems' G-CLAW tube-ejected unitary area munition. The company plans to test it first on Scorpion in mid-2016 from a common launch tube inside the surveillance-attack jet’s payload bay, and then on the Wolverine.