As speculation mounts that the Dubai air show could include a significant development in the United Arab Emirates’ contest to acquire 60 new fighters, one of the bids is set to receive high-profile political backing.

The Dassault Rafale and Eurofighter Typhoon have been vying for the requirement for the last two years, after Dubai made a surprise request for information about the latter type ahead of the last show.

With the deal still up for grabs, UK prime minister David Cameron is expected to visit Dubai on the eve of the show to lend his support to the Typhoon campaign, which is being spearheaded by the nation and BAE Systems. 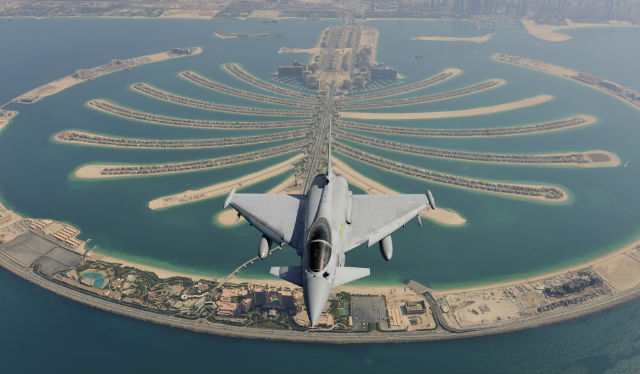 Backed by Eurofighter partner nations Germany, Italy and Spain, plus industry partners Alenia Aermacchi and EADS, the UK has previously brokered the sale of 72 Typhoons to Saudi Arabia and 12 to Oman, with Bahrain also currently showing strong interest in the type.

“We have no agreement in place with the UAE with respect to an order for Typhoon, and are continuing to work with the UAE to understand its future requirements around new technologies,” Eurofighter says.

Further evidence of the UK’s efforts to close a sale is on view this week, with a Royal Air Force Typhoon taking part in the show, along with the service’s Red Arrows aerobatic display team.

The Eurofighter team is at the show in buoyant mood, with EADS due to hand over the 400th production aircraft to the German air force on 4 December, and BAE having completed engine ground runs on the programme’s first Tranche 3-standard example. The consortium also expects to announce progress in a new round of weapons testing within days.