The Dutch parliament has approved an order for the nation’s first production batch of eight Lockheed Martin F-35A Lightning IIs, to be delivered in 2019.

“With this decision, we have reached the point of no return in the replacement of the [Lockheed] F-16,” said defence minister Jeanine Hennis-Plasschaert on 26 February.

The Royal Netherlands Air Force is already operating two F-35As, which were acquired to enable the service to participate in US-led initial operational test and evaluation of the Joint Strike Fighter. In early February, these were moved from Eglin AFB in Florida to Edwards AFB in California. 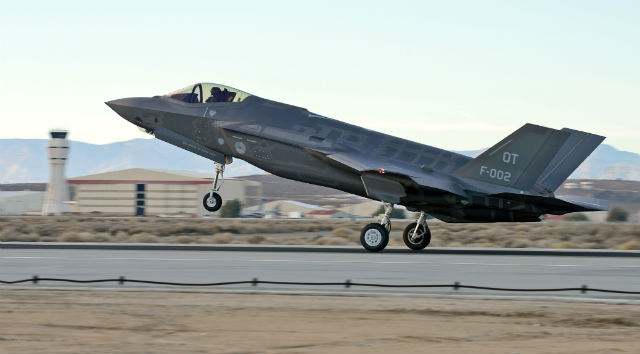 From its next batch of eight F-35As, which will be assembled at Lockheed’s Fort Worth site in Texas, six will remain at a multinational pilot training centre in Luke AFB, Arizona until the end of the transition process in 2023. The two test aircraft now at Edwards AFB will also be relocated to Luke on the completion of the IOT&E activity.

Once the Dutch air force has completed its transition to the new type, five aircraft will remain in the USA for training and testing purposes. The rest of its fleet will be used to form three squadrons based in the Netherlands.

Three further batches of eight aircraft each will be ordered between 2016 and 2018, before a final three are expected to be purchased in 2019, to complete an operational buy of 35. All of these will be delivered from a final assembly and check-out centre built at Cameri air base in Italy under a joint venture between Lockheed and Alenia Aermacchi.

The first operational unit in the Netherlands will be 322 Sqn at Leeuwarden air base, and the defence ministry will next year launch preparations to accommodate the new fighters. 322 Sqn should achieve initial operational capability status in 2021 with aircraft in the Block 3F configuration, the software standard required to support training from the previous year.

Achieving IOC status will make it possible for the air force to provide four aircraft and sufficient crews for international missions for a period of three to four months.

Full operational status with all three frontline units – including the Volkel-based 312 and 313 squadrons – should be achieved in 2024. The defence ministry plans to have 29 combat-ready pilots for an operational force of 32 F-35As, with the other aircraft in regular maintenance.

The Netherlands’ total budget for the F-35 is listed as almost €3.87 billion ($4.32 billion), including around €2.5 billion for the purchase of the airframes. Other major investments are of roughly €130 million for spare parts and about €110 million for a flight simulator. The defence ministry notes that its total purchase could rise above 37 aircraft if the total price is reduced, or if other costs remain below budget.