Daher positive on prospects for TBM 960

Daher is upbeat about prospects for its TBM 960, the latest version of its single-engined turboprop, the first delivery of which took place last month.

“The response of customers has been extremely positive to the TBM 960. We are sold out until September 2023,” says Nicolas Chabbert, senior vice-president for the French company’s aircraft division. 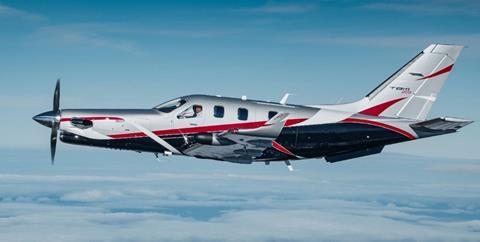 He describes the high-speed aircraft as a “quintessential TBM, representing the fifth evolution of our very fast turboprop aircraft family since the TBM 900-series’ introduction in 2014. It takes the maximum advantage of today’s turboprop technology to provide digital control of the engine and the propeller.”

Priced at $4.6 million, the six-seat aircraft was unveiled in April at the Sun n Fun show in Lakeland Florida. The first example was handed over later that month to a German businessman. European certification is already secured while US approval is pending, says Daher.

The new model replaces the TBM 940 in the Daher line-up and features a more efficient Pratt & Whitney Canada PT6E-66XT turboprop, a “fully digital e-throttle” and a “digitally controlled cabin”, together with a five-bladed Hartzell propeller, linked to the PT6E with a dual-channel digital engine and propeller electronic control system.

The aircraft has Garmin G3000 avionics and Garmin’s GWX 8000 weather radar – a new feature, according to the airframer.