Embraer punches up in business aviation

Michael Amalfitano is convinced the recovery in European business aviation is about to get into full swing, despite the region lagging North America. The president and chief executive of Embraer Executive Jets predicts the market here will soon match the growth levels the other side of the Atlantic has seen in the past 12 months. 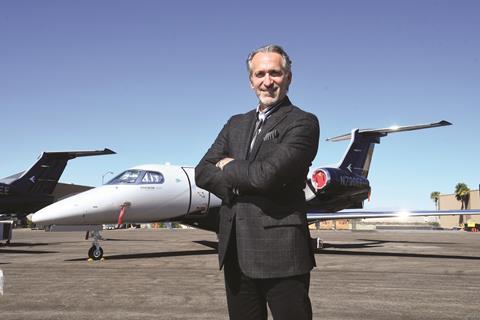 Amalfitano: In 52 years, we have certified 30 aircraft

“We are seeing corporates coming back, as they have in the US,” says Amalfitano, speaking to FlightGlobal a few days ahead of the show. “It is also being driven by first-time users and buyers. They can’t find pre-owned aircraft and most of them want the current technology and a sustainability platform, so they are coming to our brand in a big way.”

One of the Brazilian airframer’s most important customers, Flexjet, late last week confirmed it was adding three Praetor 600s to its European fleet this year, citing a 180% increase in flight activity in the region in the first four months. It is part of an order for 64 Embraer aircraft the Directional Aviation-owned fractional placed at the 2019 National Business Aviation Association convention.

Embraer also announced at the show this week that it was now offering Ka-band connectivity as a retrofit across its Praetor and Legacy families – the Legacy 450 and 500 pre-date the Praetor 500 and 600. Flexjet is the first to adopt the modification, on its European fleet of Legacy 500 types. Embraer already offers Ka-band as a factory option on its two Praetor models.

The company is showing a Praetor 600 and a Phenom 300E on the static at Geneva. “We have our best one-two punch at the show,” says Amalfitano. Both types have done well in the fractional sector. At last October’s NBAA convention, Embraer signed with Flexjet’s main rival NetJets for 100 Phenom 300s, almost doubling the Berkshire Hathaway-owned company’s fleet of the light jet.

Embraer delivered eight executive jets between January and March, its strongest first quarter since 2016, with backlog expanding by 12%. Amalfitano says supply, rather than demand, is the main brake on it delivering more. In common with the rest of the industry, Embraer and its vendors are wrestling with raw material shortages.

Embraer also this week announced it was partnering with rating system provider 4Air to offer its customers the opportunity to offset their use of carbon from flights. Customers who enroll on Embraer’s support programme will receive 25h of complimentary carbon offsetting, after which they can negotiate further deals with 4Air.

So where does Embraer go now in terms of its product journey? While the Legacy 600 and Lineage 1000 were the regional and military aircraft manufacturer’s route into business aviation in the noughties, the company’s focus has since shifted to smaller gauge types. Will it eventually try to compete with Bombardier, Dassault and Gulfstream in the long-range, large-cabin segments?

“We’re not a me-too player,” Amalfitano insists. “Everything you have seen Embraer do has been disruptive, so when you see us going somewhere it’s going to be a disruptive product.” While he does not rule out a larger aircraft at some point, he says Embraer would only enter that space if it could deliver “something completely new to the marketplace”.

Instead, he hints, Embraer’s focus is likely to be at the “bottom of the market, where there is more activity”. Embraer’s investment in urban air mobility (UAM), through its Eve spin-off, gives the company “an opportunity to start all over”, he says. Eve – which remains 90% owned by Embraer after a share flotation – is developing a four-person electric vertical take-off and landing platform.

Embraer is famously the only new entrant to break into the aerospace market in a major way in more than half a century, after the business was launched as a state enterprise in 1969. The company was dealt a blow when Boeing pulled out of a planned merger with its regional jet division at the start of the pandemic.

It has left the Brazilian company focused on its three markets of commercial, military and executive aviation, where its other products include the E2 regional jet family, the C-390 military airlifter and the Super Tucano turboprop trainer, but without Boeing’s billions to help develop new products. However, when it comes to innovation, Embraer’s ability to surprise the industry is unsurpassed.

“In 52 years, we have certified 30 aircraft,” says Amalfitano. In UAM, it wants to do much more than simply design an air vehicle, as a host of other developers are doing. “We are working on the whole holistic solution around ATM [air traffic management], maintenance and training. We are taking that 52 years’ of experience but with a start-up mentality,” he says.