Emirates Airline’s training and rostering practices have been criticised by South African investigators in their report into a take-off accident involving one of the carrier’s Airbus A340-300s at Johannesburg in April 2004.

The A340 was seriously damaged after its wheels hit the approach lights on the overrun of runway 21R before it climbed away. The aircraft returned to the airport for an emergency landing in which none of the 260 passengers and 14 crew on board was injured.

The pilot had used an erroneous take-off technique after receiving a training “tip” for achieving accurate rotation without incurring a tailstrike, which led to the aircraft failing to become airborne until it had overrun the runway, says the South African Civil Aviation Authority’s final report.

Realising the overrun, the captain rotated further and engaged take-off/go-around thrust, says the report. When the aircraft began to climb away some of its main gear tyres, the flaps and the fuselage were damaged. On the crew’s command for the flaps to retract, the electronic centralised aircraft monitor announced “flaps locked” because of damage to the flap drive mechanism. The crew elected to dump fuel and return to land on runway 03R. For both pilots it was only their second flight in an A340-300, and it was the captain’s first flight in the type as pilot flying (PF).

The report says the reason for the captain’s erroneous take-off technique was that he had “received a tip during recent recurrent training sessions to move the Side Stick Order Indicator [SSOI, see diagram] to the +9° position on the primary flight display [PFD] during rotation for take-off to attain the prescribed two-thirds backward sidestick movement needed to rotate the aircraft for take-off”. The effect of selecting the SSOI cross to +9° on the PFD’s artificial horizon, then holding it there as the horizon bar moves downward reacting to the aircraft’s rotation, demands a gradual forward movement of the sidestick, which delays unstick.

The captain, says the report, “fixated on the SSOI and lost situational awareness, which prevented him from detecting the abnormal rotation at night”. The actual purpose of the Side Stick Indication Display (SSID), which is overlaid on the attitude director indicator within the PFD until the aircraft leaves the ground, is to enable the pilot-not-flying to see, according to where the SSOI cross moves in the SSID “box”, what sidestick displacement is being used by the PF. The report recommends that Airbus consider modifying the SSID so it disappears from the PFD at the rotate point. Late last week the manufacturer had not said whether it was studying this.

The co-pilot was looking out to ensure the aircraft was tracking the runway centreline, says the report, adding that his expectation of lower performance from the A340-300 than the Airbus types he was more familiar with, the selection of flexible thrust rather than full power, and Johannesburg’s high airport elevation had led him to expect the take-off run would be unusually long, so he did not intervene in the sequence. 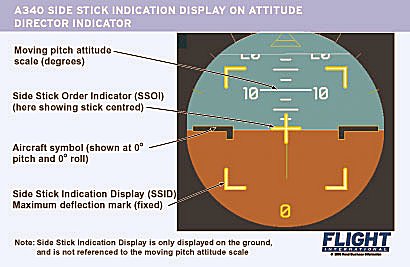 The report explains the effect of the captain’s actions as shown by the flight data recorder (FDR), and why he says he did it: “The captain applied rearward sidestick such that the SSOI, displayed on the PFD indicated +9° and, after approximately 4s, the aircraft nose started to move upward at a normal rate. When asked to explain this method of initiating the take-off, the captain said that he was using this technique, having been made aware of it in his refresher training that he had completed in March.

“During a lesson to standardise rotation techniques across all Airbus fly-by-wire [FBW] types operated by Emirates, and to avoid a tailstrike, he had been taught that the positive selection of two-third stick back was a requirement. The position could be more accurately obtained by placing the SSOI to 9° nose up on the PFD and that this would transition the aircraft to flight correctly.” The report relates that the captain had subsequently used this technique successfully during recurrent A340-300 simulator training, and line operations with the A330-200.

Emirates says it is “carefully review­ing the report, which it has just received, together with the findings of its own internal investigations. Until all the information has been studied, we are not in a position to discuss specific points. If lessons can be learned from the report, they will be, given that safety is of paramount importance.”