A large model of a widebody aircraft on Comac's stand caught the attention of many attendees on the first day of Airshow China.

This is the first time the Chinese manufacturer is showcasing a physical model of its planned twin-aisle project with Russia's United Aircraft.

The model has both Comac and UAC’s logos embossed on its front fuselage. A red and blue livery runs across its fuselage and tail. The red resembles the Chinese flag, with two yellow stars on it.

Similar to the 777-200, the aircraft has four doors on either side. The flair of its wingtips to a fine tip is reminiscent of the Airbus A350. 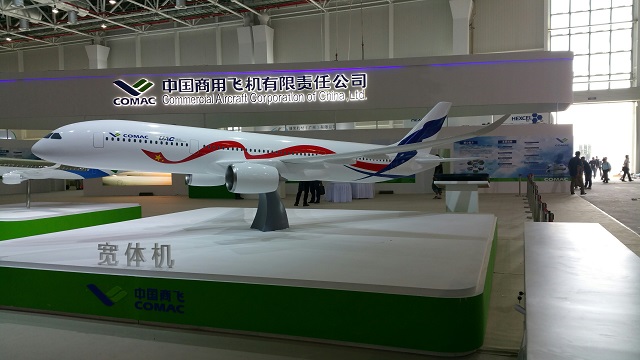 The duo has started the process of setting up a joint venture company, with a plan for it to be officially launched within the year. The firm will collaborate on the development, production and after-sales support of a widebody airliner.

Comac says the widebody will have lower operating costs, with its aerodynamic design, extensive use of composites as well as with the use of a next generation engine.

The first flight of the aircraft is planned for 2022, and entry into service between 2025 and 2027. It has also been decided that final assembly will be in Shanghai, near the C919 assembly line. Some market observers have already started referring to the proposed aircraft as the 'C929.'

UAC president Yuri Slyusar has said that the aircraft will be powered by either GE Aviation or Rolls-Royce engines. In the longer term, both countries want to develop their own powerplant for the type.