Bombardier delivered the first CS300 to launch operator Air Baltic in a 28 November ceremony in Mirabel that formally marked the end of the CSeries development programme.

“It’s exciting to be here at the end of the process. Of course it’s been a long journey for everyone,” says Rob Dewar, Bombardier’s vice-president and general manager of the CSeries programme.

The CS300 will be flown to Riga in the coming days to be formally accepted by the Latvian carrier. 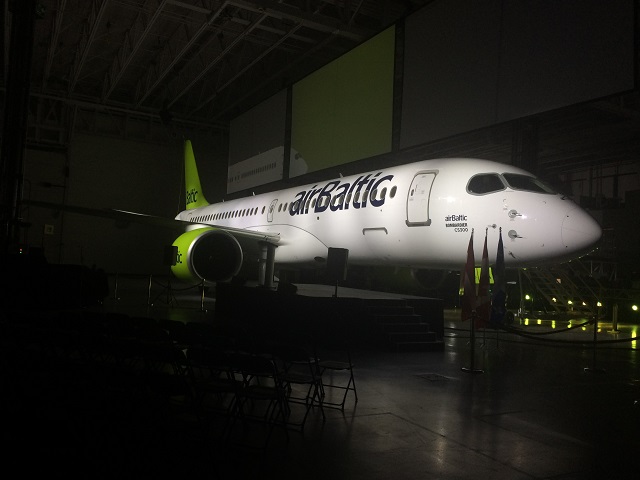 The CS300 is stretched by 3.7m (12.25ft) compared to the CS100. It uses a slightly more powerful version of the Pratt & Whitney PW1500G geared turbofan, but shares the same fly-by-wire control architecture, composite and hybrid-metallic structure and five-abreast cabin cross section of the CS100.

The larger CS300 is the more popular of the two variants, with 247 firm orders in Bombardier’s backlog, according to the FlightGlobal Fleet Analyzer. Bombardier has collected 126 orders for the CS100.

The entry-into-service for the CS100 has proceeded relatively smoothly, with little of the drama accompanied by the introductions of the Airbus A320neo or Boeing 787.

The only blemish in the introduction is a shortage of available engines to make aircraft deliveries. As it waits for P&W to address critical parts shortages on the PW1500G, Bombardier was forced to reduce scheduled CSeries deliveries in 2016 to seven from 15.

For the state majority-owned Air Baltic, the CS300 is a long-awaited replacement for Boeing 737-300s and 737-500s, joining a fleet of 12 Bombardier Q400 turboprops to service routes throughout Europe, Russia and the Middle East.

On route proving flights last September, Bombardier tested the CS300’s resilience on a series of ferry trips from Air Baltic’s base in Riga to planned destinations in the region, including to Vilnius in Lithuania and the Estonian capital Tallinn. Air Baltic also hopes to use the CS300 to expand its network by one-third, with Abu Dhabi and Tenerife earmarked as possible new destinations.

Air Baltic looks upon the CS300 as a new aircraft that differentiate the carrier’s service in a mostly commoditised market for regional air travel.

“Our biggest expectation is that when the passengers will come [on board] it will be, ‘wow’. We want to give the passengers a feeling that it is not a usual aircraft,” says Kristaps Lapsa, an Air Baltic fleet project manager. “And they will come back and fly it more and more.”