Airbus has commenced the flight-test campaign for the A350-1000 with the variant becoming airborne for the first time at Toulouse.

The aircraft, powered by Rolls-Royce Trent XWB-97 engines, lifted off at 10:42 local time. 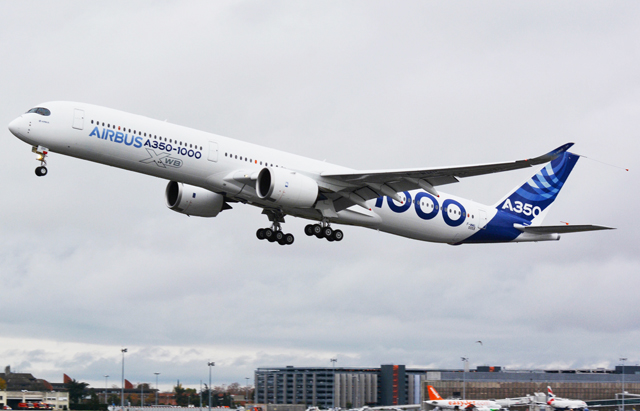 Conceived as an 11-frame stretch of the -900, the aircraft underwent a revision in 2011 to extend its range and provide broader appeal to operators.

The wing is modified from that on the -900, with an extended trailing edge, and Rolls-Royce enhanced the powerplants to deliver 97,000lb thrust rather than the previous 93,000lb.

Deliveries of the aircraft are scheduled to begin in the second half of 2017, some two years later than the pre-revamp schedule, which enabled Airbus to concentrate on the re-engined A320neo and allow a degree of technological insertion derived from the A350-900 development.

Airbus has invested heavily in the A350-1000, intending to capitalise on a lucrative sector which has been left exclusively to Boeing since it developed the 777-300ER.

The 777-300ER was first delivered to airline customers – among them Air France and Japan Airlines – in mid-2004, and the total orders for the twinjet variant edged over the 800 mark in October.

Airbus’s highest-capacity aircraft at the time, the A340-600, had entered service two years earlier than the 777-300ER but its four-engined design rapidly lost favour against the twin-engined economics of the Boeing.

While the revision had proven controversial among earlier customers for the aircraft, Airbus would point to high-profile orders from British Airways, United Airlines, Japan Airlines and Cathay Pacific as endorsements for its decision.

Airbus also notes that the -1000’s figures have been lifted by the conversion of a number of A350-900 orders from customers including LATAM and lessor Air Lease.

The -1000’s maiden flight takes place at a crucial node in the development of large twin-engined jets, with the dominance of the 777-300ER waning – a production cut is due next year – as Airbus puts forward more substantial competition and Boeing works on its 777X successor.

Airbus estimates that the intermediate twin-aisle market for the next 20 years amounts to nearly 2,600 aircraft of which around half will be delivered to Asia-Pacific carriers.