Rolls-Royce is aiming to bring the number of Boeing 787s on the ground for Trent engine modification reasons to fewer than 10 by the end of the second quarter.

While the manufacturer is taking steps to deal with the impact from the coronavirus crisis, it is maintaining efforts to address the technical problems which have badly affected the Trent 1000 powerplant.

It says these efforts have “continued to deliver positive results” and the number of aircraft on the ground, awaiting fixes, had fallen to the mid-20s level by the end of March, compared with the mid-30s at the end of February.

“We expect to reduce this to single digits by the end of the second quarter,” says the company.

Rolls-Royce points out that, despite the coronavirus situation, its maintenance and overhaul facilities are still operating.

“Design work remains on schedule to resolve the last remaining technical issue,” it says, referring to the new high-pressure turbine blade being developed for the Trent 1000 TEN powerplant.

Ground-testing of the new blade is “progressing through the second quarter”, says the company, and it is expecting the blade to be ready for introduction to the fleet by the end of the first half of 2021. 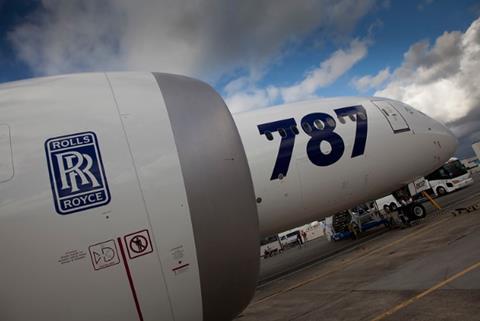