Etihad shows off new colours on A380

Middle Eastern carrier Etihad Airways has unveiled its new livery on an Airbus A380.

The Abu Dhabi-based carrier showed off the colour scheme at an event in Hamburg where it rolled out the jet.

Etihad chief executive James Hogan said, during the ceremony, that the geometric design represented the "modern architecture" of the United Arab Emirates while the brown and gold colours resembled the landscape. 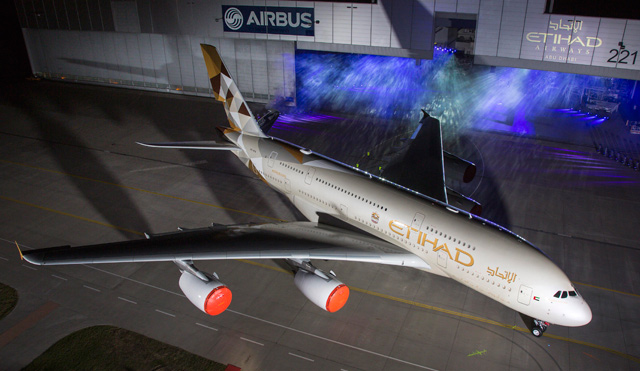 "It's a livery which expresses who we are," he says.

Airbus chief Fabrice Bregier described the livery as "stunning" and a "vivid symbol" of the airline's confidence.

Etihad has 10 of the type on order, to be delivered over the next three years.

It will receive the first A380 in mid-December and put it into operation on the London Heathrow route. Heathrow will become an all-A380 operation for Etihad in mid-2015.