Belgian investigators arrived in the Democratic Republic of Congo’s capital city of Kinshasa 5 October to determine the cause of what is believed to be the worlds first case of a civilian being killed by a crashing military UAV.

The 3 October accident, involving an Israeli Aircraft Industries-Belgium Eagle consortium B-Hunter, killed one woman and injured at least three others.

The UAV was being operated by Belgian Defence Force air component personnel on attachment to the European peace keeping force (EUFOR) Congo. 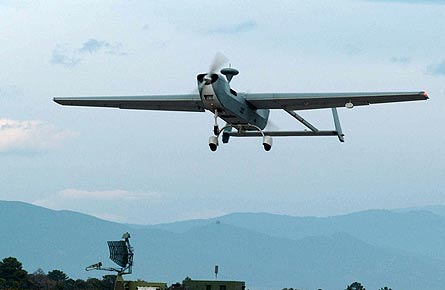 A military EUFOR spokesman has told Flight Unmanned that the UAV experienced failure of both its four stroke engines immediately after take off from Kinshasa’s N’Dolo airport.

The UAV, which is remotely piloted during the take-off and landing stages, had reached an altitude of “5-6 metres” when the simultaneous failures occurred. It continued to rise and glided for some distance, before making a “rough landing” on the Boulevard Triomphal the spokesman said, around a kilometre from the airport.

The woman was killed during the landing phase.

Shortly after coming to rest the UAV caught fire. It is currently unclear whether the blaze was caused by the rupture of tanks during the landing, or was deliberately lit by spectators angered by the woman’s death the spokesman said.

Emergency response units attending the crash site identified three people with burns. A fourth possible victim presented at EUFOR headquarters in Kinshasa 6 October claiming to have received burns as a result of the accident. Those claims are being investigated further the spokesman said.

Belgian authorities have suspended all B-Hunter operations since 3 October pending the outcome of investigations.

The accident investigation team is expected to take up to two weeks to complete their basic analysis.

The UAV loss was the second experienced by the Belgian Defence Force since deploying a four aircraft B-Hunter system to the DRC in July as part of a 1100 member EUFOR security detachment.

The first was shot down on final approach to N’Dolo airport on 28 July by a lone gunman. A replacement for that UAV was deployed in early August.

The Belgian Defence Force says that up to 7 September the detachment had achieved 30 missions totalling more than 100 flying hours.

EUFOR is providing security for presidential and legislative elections in the DRC and is scheduled to remain in country until 30 November.