Evektor secures agreement for up to 50 EV-55s from China

Czech general aviation manufacturer Evektor has signed an agreement with China’s Guangdong Longhao group for the purchase of up to 50 EV-55 Outback utility aircraft.

The twin-engined turboprops will be used by the transportation infrastructure and engineering company to spearhead its general aviation expansion in China. According to Evektor, this will involve developing several new airports around the country, to be served by EV-55s. The aircraft will be supported at each site by a dedicated maintenance centre, to be established by Evektor.

The Kunovice-based airframer was snapped up by Malaysian company Aspirasi Pertiwi in 2014 for $200 million, and is working to secure European CS-23 certification for the nine- to 14-seat, all-metal aircraft in 2017. 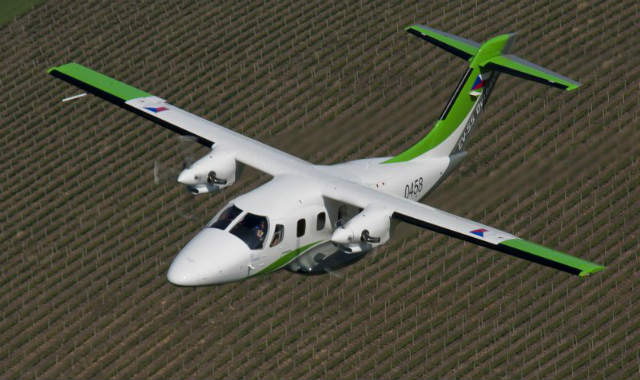 One EV-55 prototype has logged over 220h of flight testing, and a second is expected to join the programme shortly.

Powered by a pair of Pratt & Whitney Canada PT6A-21 engines, the EV-55 is Evektor’s first foray into the business and utility aircraft market. The company is best known as a producer of light aircraft, such as the two-seat SportStar and Harmony piston singles.

The manufacturer says its objective with the 800nm (1,480km)-range EV-55 is to replace huge fleets of “obsolete” six- to nine-seat piston twins – including Cessna 402/404s – and provide a worthy competitor to established in-production single-engined utility rivals, such as the Pilatus PC-12NG and Cessna's Caravan family.