Dassault's Falcon 8X business jet is entering the final stages of its flight-test campaign, with certification and service entry of the ultra-long-range flagship on track for the second and third quarters of 2016, respectively.

“The three aircraft in the flight-test programme have nearly completed all certification test requirements, and to date have accumulated over 650 flight hours in 325 flights,” the French airframer says.

After undergoing thermal, acoustic and cabin equipment testing at Dassault’s US completion centre in Little Rock, Arkansas, the third and final flight test aircraft, serial number 03, was flown in early March to Rankin Inlet, Nunavut, on the northwestern shore of Canada’s Hudson Bay, for three days of cold-soak trials. “All systems, including avionics, electrical, hydraulic and digital flight control systems, performed flawlessly during the tests [between 9-11 March], despite temperatures that dipped as low as -27°F (-33°C),” says Dassault. 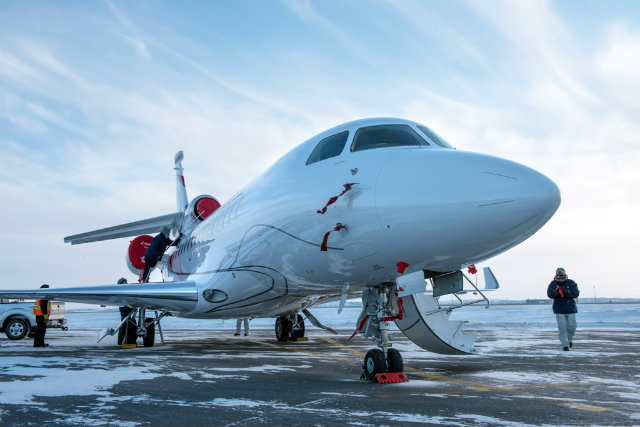 Serial number 03 – the first 8X equipped with a full interior – will now begin a global test campaign to demonstrate aircraft operational reliability and performance in different conditions of flight. The month-long campaign will take it through Europe, the Middle East, Asia and North and South America, and include more than 60 missions, designed “to represent the extremes of what 8X customers might expect to face during their aircraft’s operational life”, says Dassault.

In preparation for the 6,450nm (11,930km)-range trijet’s entry into service, Dassault has begun ramping up production at its Bordeaux Mérignac final assembly facility. Serial number 21 is now being manufactured at the plant in southwest France, and six aircraft are undergoing completion in Little Rock.

Dassault hopes the 8X will help revive flagging sales of its Falcon family of high-end business jets. Last year, the company recorded its lowest annual delivery tally in a decade, with only 55 2000S/LXS, 900LX, and 7X aircraft shipped during the period. That compared with 66 Falcon deliveries in 2014 and 77 the previous year.

The manufacturer blames a slowdown in some of its key markets, including China, Russia and Brazil, which has offset a modest recovery in Europe and North America. It is expecting to deliver 60 units in 2016.