Newly-established Saudi Arabian lessor AviLease has identified budget carrier Flynas as it first customer, to which it will supply 12 Airbus A320neos.

AviLease has been set up by the Saudi sovereign Public Investment Fund.

The company has hosted a formal launch event in London during the Farnborough air show.

AviLease is intended to support the investment fund’s mandate to “unlock” sectors that can assist the diversification of the Saudi economy from the oil market.

Its creation is in line with the ‘Vision 2030’ strategy being overseen by the kingdom’s government.

The dozen Flynas jets will be the subject of a sale-and-leaseback agreement with deliveries to the Saudi carrier taking place over 2022-23. 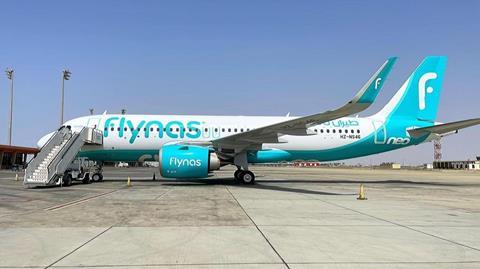 Flynas has dozens of A320neos and A321neos on order

“We see great opportunities for expansion supported by the strategic location of Saudi Arabia and the prospects opened by Vision 2030 for the air transport sector,” says Flynas chair Ayed Aljeaid.

The carrier adds that its “ambitious” expansion will help the national Saudi aviation strategy which intends to raise annual passenger numbers to 330 million and connect the kingdom with 250 destinations by the end of the decade.

AviLease says the launch of the lessor “marks the start of the journey to become a leader in the aircraft leasing market”.

It says it will have a “critical role” in advancing the Saudi aviation strategy and contributing to Vision 2030.