AgustaWestland has joined forces with Russian Helicopters to jointly develop, produce and market an all-new 2.5t-class single-engined helicopter. The aircraft will be positioned at the bottom of the Anglo-Italian airframer's product line and will be pitched against the Eurocopter EC130 and the Bell 407, says AgustaWestland chief executive Bruno Spagnolini.

The programme will be shared on a 50:50 basis, and the aircraft is predicted to cost around €200 million ($250 million) to bring to market. "It will be designed for a global market and for a variety of applications," says Spagnolini.

This venture builds on an established partnership between the two airframers. In 2010 they signed a joint venture to assemble the AW139 medium twin-engine helicopter for the Russian and CIS markets under the HeliVert banner. The new facility in Tomolino, Moscow is expected to begin production shortly with the first aircraft scheduled for customer delivery before the end of the year. The HeliVert facility may house assembly of the new light helicopter. "There will be plenty of room here," Spagnolini says.

Meanwhile, AgustaWestland is planning to open a civil helicopter production line at its Yeovil, Somerset, UK base. The facility currently produces the AW101 and the AW159 Wild Cat military helicopters.

"We will start with the AW169 and then the AW189," says Spagnolini. "Within two years we expect the commercial helicopter business to account for 40% of Yeovil's business," he adds. 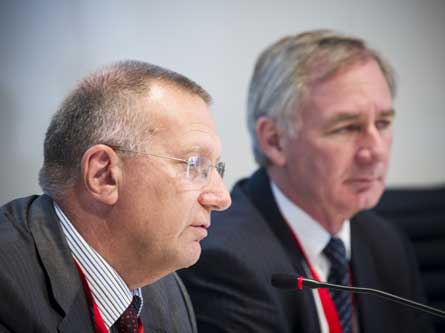