Business aviation has become an integral part of the Farnborough air show fabric since the introduction in 2004 of a business aircraft park – affectionately known as the BAP. This purpose-built arena features a dedicated aircraft static display along with exhibitor chalets for entertaining VIP guests during the seven-day event.

“The BAP is an area devoted to business aircraft manufacturers, their products and services,” says Amanda Stainer, commercial director for show organiser, Farnborough International (FAL). “It is now an integral part of the event and contributes significantly to the billions of dollars of business that is achieved during the trade week.”

This wasn't always the case.

Sixteen years ago, Farnborough witnessed a mass exodus of traditional business aircraft manufacturers to Europe’s new business aviation trade show EBACE, held annually in Geneva in May. “It was a wake-up call,” says Stainer. “EBACE was a huge draw for this industry, and still is.”

Business aviation was considered by many industry players a minor component of the Farnborough air show in 2000, Stainer admits. EBACE, with its focus solely on this market sector, was an ideal venue to woo its target audience – and with money tight, many could no longer afford to exhibit at both events.

“In order to bring people back, we had to listen and adapt,” says Stainer. “Not only did we create [a] purpose-built area for this sector, but we have given our customers the flexibility to exhibit for three days – in keeping with traditional business aviation shows.”

The gamble has paid off. Leading business aircraft players returned to Farnborough in 2004 and the static park has consistently played host to an impressive line-up of business aircraft. This year that tally will be in excess of 30 jets, turboprops and piston types from across the manufacturing spectrum, including big hitters and Farnborough regulars Bombardier, Dassault, Embraer, Gulfstream and Piaggio. 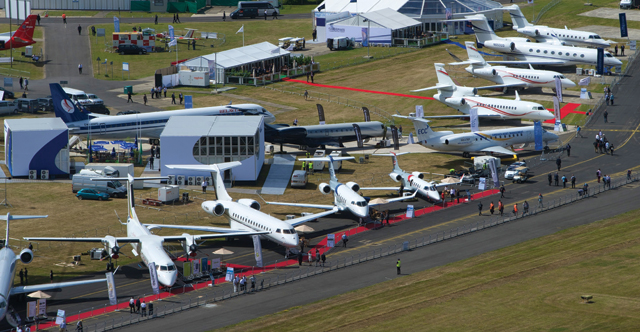 A number of aircraft will also be making their Farnborough debut. These include Honda Aircraft’s new HondaJet. The light twin – which received European type certification on 23 May – is owned by Honda’s northern European distributor, Marshall Aerospace. The UK company took delivery of the six-seat aircraft at EBACE.

Embraer will showcase its Legacy 500 business jet for the first time at Farnborough. The midsize type’s appearance on the static is heralded by the Brazilian airframer as a “highlight of Embraer massive institutional presence” at the show. The Legacy 500 will be the only business jet from the Embraer stable on display, where it will be joined by a yet-to-be-decided line-up of commercial military aircraft, says the company. “The Legacy 500 debut at Farnborough is related to the potential market demand in the region,” says Embraer. “Europe has the world’s second-largest concentration of business jets and [the] UK is one of the most important markets in this region.”

Diamond will also show off its flagship piston-twin, the DA62, alongside the new DA42MPP (multi-purpose platform) and DART 450. The two-seat trainer is taking a break from its flight-test campaign to make its “world premiere”, says Diamond. “This is the first time the aircraft will be presented to the public on static and in flight.”

Also making its Farnborough debut is the Gulfstream G650ER. The ultra-long-range twin will appear alongside two stablemates – the super-midsize G280 and the large-cabin G450. “Farnborough has become a really important event in the Gulfstream calendar,” says Trevor Esling, Gulfstream’s regional vice-president of international sales, Europe, Middle East and Africa. “We were overwhelmed by the number of visitors we had at the 2014 event. Indications are that we will be busy again this year, so we have increased the size of our chalet to cater for the numbers.”

Esling attributes Farnborough’s popularity to its “huge” international appeal. “Traditional business aviation shows like EBACE attract the kind of people we typically sell to – high net worth individuals, companies, for example. But Farnborough attracts the government delegations, which make up a small but important part of our customer base.”

He says 8% of Gulfstream’s global fleet of 2,500 aircraft are in service in government/special missions roles. This covers 38 countries – including all the states in the Middle East.

Esling says Farnborough is also an opportunity for Gulfstream to meet up with those customers who cannot, or do not, attend EBACE. “It only takes one customer to come through the door to make the substantial cost of exhibiting at Farnborough worthwhile,” says Esling.

Like Embraer, Esling believes the dominance of the UK is a major factor of the show’s appeal. “It is home to a vast number of businesses and many wealthy people have a base in London,” Esling says. More than 50 Gulfstream types are also based in the country where the Savannah, Georgia-headquartered airframer has a service centre and a sales office.

“There is a lot of excitement and chatter around the new G500 and G600 which will be conversation pieces at Farnborough,” he adds. The large-cabin, long-range business jets are in development and scheduled for certification in late 2017 and 2019 respectively.

FAL’s Stainer says over 70% of its visitors are international. “This event is more international than any other [aviation] show,” she says. Commercial and military delegations from over 40 countries – including Turkey, China, South Africa and Bahrain – are attending the gathering and looking for procurement opportunities. “There is particularly strong interest in business aviation,” she adds.

While the show’s numerous international delegations are a draw for business aircraft manufacturers and suppliers, the airfield, situated around 65km southwest of central London, is also a major attraction for VIP visitors who choose to fly into the event.

The TAG Aviation-owned executive airport – on the other side of the runway – is a symbol of London’s status as Europe’s centre of business aviation. The former military facility was taken over by TAG in 2003 and extensively rebuilt three years later with an iconic hangar and terminal building. The latter recently underwent a £1 million ($1.5 million) overhaul with new dedicated passenger and crew lounges, and a separate “fast track” entrance for customers to the airfield, which TAG will be promoting at the show.

With annual aircraft movements totalling 25,000 and rising, TAG Farnborough chief executive Brandon O’Reilly describes the facility as “the only bespoke business aviation airport in the UK, designed specifically for VIPs and business travellers”.