The US Navy is integrating the Raytheon-built Miniature Air Launched Decoy-Jammer (MALD-J) onto the Boeing F/A-18E/F Super Hornet strike fighter.

"MALD will save sailors' lives because it saturates enemy integrated air defense systems, causing them to attack the wrong target instead of attacking our aircraft," says Harry Schulte, vice president of air warfare systems at Raytheon (H3/D10, OE5, chalets A20-21 and B1-6).

The 300lb (136kg) miniature air-launched drone, which has a range of about 500 nautical miles (926km), replicates the flight profiles of friendly aircraft in order to confuse enemy defences. The MALD-J adds a jamming capability to the basic decoy.

Integrating the MALD-J will include a series of risk reduction activities and technology demonstrations, Raytheon says. The company is working with the navy to ensure the weapon is capable of withstanding the rigors carrier operations.

Raytheon says it is taking advantage of the MALD's modular design, which would enable navy sailors to rapidly change the weapon's electronic warfare payload in response to threats. 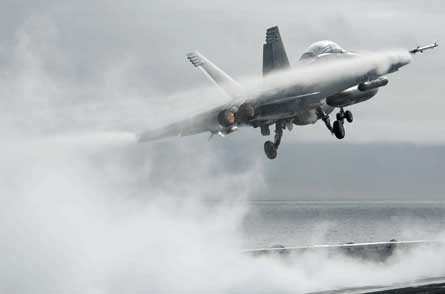