Korean investigators have revealed only 18min elapsed between detection of fire on board an Asiana Airlines Boeing 747-400F, and the fatal loss of the aircraft in the sea. But while the inquiry has disclosed more details of the dangerous cargo on board the aircraft, it has yet to reach conclusions over the origin of the fire.

The cargo jet, operating Seoul-Shanghai on 28 July 2011, crashed about 130km (70nm) west of Jeju while attempting to divert to the island. Preliminary findings by Korea's Aircraft and Railway Accident Investigation Board show the aircraft was 50min into its flight and had just been transferred to Shanghai area control centre when it made the emergency call.

One of the pilots mentioned an aft cargo fire and that the aircraft was descending to 10,000ft (3,050m). It turned north-east, requesting radar vectors to Jeju.

Data from Seoul Incheon area centre indicates the aircraft, travelling at about 400kt (740km/h), continued to descend to about 8,000ft before climbing again, in an unstable vertical profile. 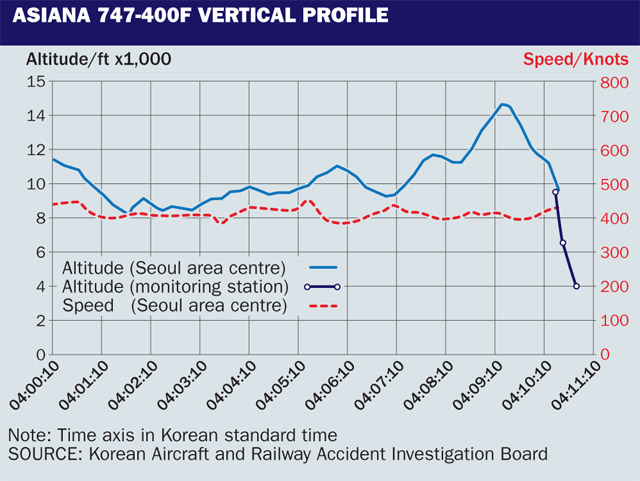 Communications with air traffic controllers in Seoul were relayed via a Korean Air aircraft which was operating near the stricken jet. These communications also included a statement from the Asiana captain that the rudder control "is not working".

The Incheon data shows the aircraft was rising and sinking before it climbed to about 14,000ft and sharply descended.

Data from a Korean monitoring and control station suggest the aircraft fell some 10,000ft in 90s. As it descended, the captain again said there were problems with the rudder and flight controls and the first officer added, shortly afterwards: "We have heavy vibration on the airplane, may need to make an emergency landing, emergency ditching. Altitude control is not available due to heavy vibration, going to ditch." Contact with the aircraft was then lost. During the emergency, about 18min, the aircraft's ACARS addressing system issued several main-deck fire-detection messages as well as failure signals relating to the yaw damper and flight recorder.

Search teams - hampered by atrocious weather, including seven typhoons - combed the area in the weeks after the accident but failed to detect a signal from flight recorder locator beacons. Operations to retrieve wreckage, however, continued until mid-June. Wreckage analysis showed severe damage to the airframe, from fuselage station 1700 to the aft pressure bulkhead, and this section appears to have sustained the greatest fire damage. Much of the damage occurred between the aft main-deck freight door and the L5 door after exposure to the highest temperatures - illustrated by severe thermal damage on the interior structure and discolouration of the paint on the exterior of the skin. Soot trails on the aft external skin indicated smoke had exited outflow valves. There was also evidence of sooting "all the way forward" on the main cargo deck, the inquiry says, on ceiling liners beneath the cockpit. When the aircraft was loaded at Seoul Incheon airport, 24 cargo positions on the main deck and 11 in the lower hold were used.

The main-deck pallets included two which were listed as containing dangerous goods, loaded into the positions designated ML and PR, adjacent to the rear freight door. Among these hazardous shipments were lithium-ion batteries - for use in hybrid electric vehicles - as well as highly-flammable and corrosive liquids, for integrated-circuit manufacture, plus lacquers and paints.

Lithium batteries have long been a concern to operators, and earlier this year the International Civil Aviation Organisation examined new safety standards in the wake of the Asiana crash and the loss of a UPS 747-400F in Dubai after an in-flight fire in September 2010.

One of Asiana's instructors, exclusively in charge of dangerous goods training for the carrier's pilots, told the inquiry he had emphasised pilot awareness of safety standards for lithium batteries following the UPS accident.

The inquiry points out that results of various electrical and shock tests carried out by the battery manufacturer two years before the crash indicated "no problems that would lead to thermal runaway or fire". It adds that the manufacturer has adopted a 10% state-of-charge for all its lithium-ion battery shipments. Neither the loadmaster nor the nine handlers who dealt with the dangerous good placed on the Asiana aircraft observed any damage or leakage to the containers.