Sukhoi has played down the impact on its T-50/PAK-FA programme of a fire that damaged one of the five flight test aircraft while on the ground at Zhukovsky air base near Moscow on 10 June.

The company says smoke was observed coming from the fighter’s starboard engine air intake during landing, and a fire broke out shortly afterwards.

However, the blaze was “quickly extinguished”, says Sukhoi, and the aircraft will now be repaired. “This incident will not affect the timing of the T-50 test programme,” it adds. 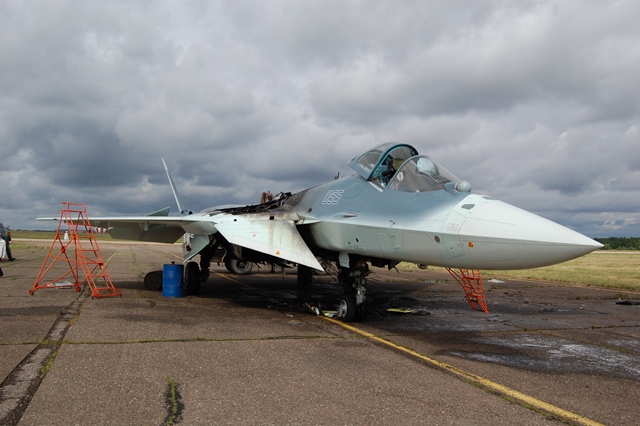 Speaking to Flightglobal on 5 June, Mikhail Pogosyan, president of Sukhoi parent United Aircraft, had praised the results from the current round of testing.

They “confirm the schedule of the programme and all the targeted milestones that we have to run through”, he says. Five prototypes were participating in the test and certification work, which is due to conclude in 2015, ahead of first delivery envisioned for 2016.

Launched earlier this year, the design is in the second phase of flight test activity, which is being carried out in conjunction with the Russian air force – Sukhoi’s principal customer for the stealthy type.

A previous evaluation programme to validate the PAK-FA’s performance was concluded in 2013. The new activities cover onboard equipment such as avionics.

Work on the type’s final assembly line at the KnAAPO plant in Komsomolsk-on-Amur is also complete, Pogosyan adds. "We have prepared for the launch of production in parallel with the flight test programme. It won't require much additional time to develop serial production.”