If parked side by side, no-one would confuse a Bell 407 and a Schweizer 333, yet these vastly different light helicopters now share a numerical designation in the US military’s inventory.

Why? The answer is very simple: the US Navy is redefining the concept of an “endurance upgrade” with the Northrop Grumman MQ-8C Fire Scout.

The formula for improving the endurance of a gas-powered flying vehicle is well-known: either reduce weight, add fuel, make the engine more efficient, or some combination of all three.

But the navy’s endurance upgrade for the MQ-8B entails swapping out the entire aircraft – replacing the Schweizer 333 with the Bell Helicopter 407 for the MQ-8C – while reusing 90% of the systems that transform both aircraft into unmanned surveillance and – potentially – strike helicopters.

In the era of the unmanned air vehicle (UAV), the MQ-8C may reveal how the aircraft has become an interchangeable part number, as long as the result remains compatible with the software and systems that remotely control how the aircraft operates.

The idea for the MQ-8C began with an urgent request by the US Africa Command, a frequent user of the MQ-8B (including one aircraft famously shot down by loyalist forces in Libya in 2011).

Such a request – officially called a joint urgent operational needs (JUON) statement – allows the US Navy to circumvent the conventional acquisition process and use a fast-track option called a rapid deployment capability (RDC).

The navy plans to transition from an RDC to a traditional programme of record, ultimately buying 96 MQ-8Cs.

As the name implies, the RDC calls for an aggressive development schedule. The navy awarded Northrop a $262 million contract in 2012 to develop and test the MQ-8C, plus buy the first two development aircraft and first six production models. Another contract was signed in March 2013 to buy six more MQ-8Cs.

The schedule seems even more aggressive when considering the scope of the development programme.

Administratively, the Bell 407 is merely an interchangeable part number within the MQ-8C’s overall system. Technically, however, the familiar-looking manned Bell 407 internally transforms into a very different aircraft as the MQ-8C, with far greater capabilities than the standard version of the 20-year-old helicopter.

Surprisingly, the unmanned MQ-8C is modified to be more survivable in a crash as an unmanned aircraft than the Bell 407 as a manned, commercial helicopter certificated for Part 23 operations under US Federal Aviation Administration Regulations.

The reason for this improvement is not any excessive care for the cost of the control and sensor technology on board the MQ-8C, but for the lives of the people on board the ship that receives the aircraft.

“While we’re not worried about the crash loads because there’s a crew on board, we are worried about the crash loads and the integrity of our fuel system because we’re landing on the pitching deck of a ship with a large crew. So we want to make sure the structural integrity is there to protect the people on the vessel we’re landing on,” says George Vardoulakis, Northrop’s vice-president, medium range tactical systems.

The Bell 407 is a light-single helicopter in the same class as the AgustaWestland AW119 or the Airbus Helicopter AS350. But Bell’s design set the 407 apart from the competitors, as Northrop considered options for extending the duration of the MQ-8 platform. Maximising payload to carry sensors and fuel to perform a long-endurance mission was the most critical.

“That quickly got us down to the Bell 407,” says Vardoulakis. “There was so much work done by Bell to make the aircraft lighter.”

The 407 was among the first commercial helicopters to embrace the advantages of composite materials, which are lighter and in some cases stronger than metal. Bell employed composites in the rotor hub, doors, side panels and aft fuselage skins. The result was a surprising advantage over the competition in the ratio of empty weight to gross weight, allowing the 407 to offer the most endurance.

“Quite honestly, even when we showed Bell our calculations, they didn’t believe them,” says Vardoulakis.

The calculations included a complete remodelling of the Bell 407 interior. With no flight crew aboard, all of the provisions for humans are removed, including the seats and avionics. Even the stick and collective are removed in the MQ-8C configuration.

The control inputs are replaced with a system identical to that found on the MQ-8B. A human controller on the ship guides the helicopter by sending digital waypoints to the aircraft using an ARC-210 radio. After receiving the transmission, a datalink control processor relays the message to the vehicle management system computer, which directs movements to the electronic rotary actuators that adjust the rotor system and flight control surfaces as if there was a pilot on board moving the collective and stick.

The computer systems are housed in avionics racks contained within Faraday cages for protection from electromagnetic interference. The racks slide in and out using the existing 407 cabin doors.

The endurance of the MQ-8C is significantly higher than the manned version of the aircraft. As a result, Northrop has doubled the size of the 407’s fuel tank with the addition of a 1,700 litre (450gal) fuel cell. The additional fuel is stored on top of the existing tank, allowing the higher cell to feed the lower tanks. That design means Northrop can reuse the fuel sensing system in the Bell 407, making the conversion process slightly more straightforward.

By keeping the new fuel cell inside the cabin, Northrop avoided significantly altering the aircraft’s centre of gravity.

“We were able to change it in a very minor way, but it allowed us to keep it in what I’ll call the sweet spot,” Vardoulakis says.

More processing power on board the aircraft means more heat, which must be dumped or cooled. A skylight on the starboard side of the cabin is modified into a vent to dump hot air offboard. Northrop is also adding two cooling panels in the front, two more in the back and opening the air vents on the passenger bay doors to drive cool air through the centrebody of the aircraft.

But transforming any aircraft built to commercial standards into military hardware requires major changes. All of the Bell 407’s original wiring must be removed and replaced with hardware that meets military specifications designed for combat operations. The same standards also mean changes to certain fluids, such as in the hydraulic system.

The Bell 407’s original drivetrain survives almost intact in the MQ-8C design, but with some important modifications. The Rolls-Royce M250 engine is upgraded with a “VIP kit” that reduces fuel burn by 2% and increases engine performance in hot and high-altitude conditions by 5%. The M250 already includes a full authority digital engine control (FADEC) system, but Northrop has upgraded it on the MQ-8C with a dual-channel unit.

Bell’s glassfibre, four-bladed rotor system also has to be modified to be based on a ship. The 35ft (10.7m)-diameter rotor is equipped on the MQ-8C with an aft-folding mechanism that Bell developed for the ARH-70 Arapaho, an armed scout cancelled by the US Army. The tail rotor remains unchanged except for the removal of the cosmetic fairing to save weight. 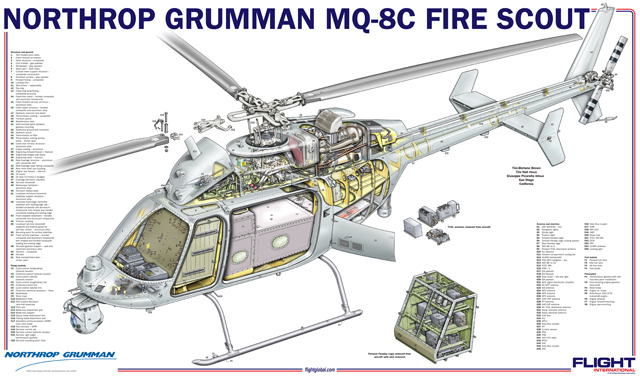 Like the Schweizer 333, the Fire Scout came of age in the second wave of UAVs to enter US military service, replacing the aptly-named AAI RQ-2 Pioneer aboard US Navy ships.

The MQ-8A, however, proved less capable than the navy preferred, and the programme was dropped. After Northrop proposed an upgraded, four-bladed MQ-8B to the US Army, the navy's interest returned, and production was restarted.

The MQ-8C now aims to set the new standard for a shipborne, vertical take-off UAV. In operations, it will be more capable than any competing VTUAV currently in service, offering the US Navy more flexibility for the surveillance and targeting mission and, perhaps, opening the door to new missions, such as autonomous cargo delivery.