In a major shakeup of its aircraft buying plans, the Brazilian air force plans to nearly double its order of Saab Gripen fighters and cut its number of Embraer KC-390 Millennium transports roughly in half.

The service explained its plans in two interviews with Brazilian media on 1 and 2 June. 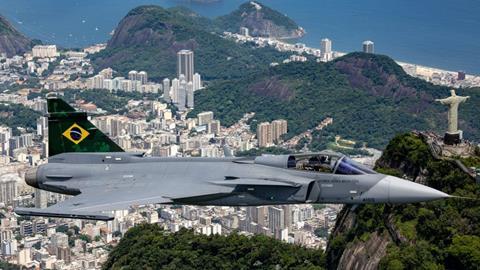 In total, the Brazilian air force aims to buy between 60 and 70 examples of the Gripen E/F, a fighter that it renamed the F-39E/F. That is up from an initial order of 36 aircraft.

“We bought the first batch, but our expectation is that it will be somewhere around 60 or 70 aircraft,” said commander of the Brazilian air force, Lieutenant Brigadier Carlos de Almeida Baptista Jr., in an interview with Valor Economico, a financial newspaper in Brazil on 2 June. “Soon, it will be time to start talking about a second batch. With a country the size of Brazil, you can’t talk about just 36 fighter planes.”

Plans to increase its order of F-39E/F fighters come as the country is also cutting back on its order of Embraer KC-390 transports. Brazil had originally ordered 28 examples of the aircraft, but after negotiations with Embraer expects to receive between 13 and 16 units over the course of the programme, it says in an interview with Brazilian publication Aero Magazine. The service had earlier said that Embraer would only produce two aircraft per year going forward.

The negative impact of the coronavirus on the Brazilian economy, and thus government tax revenues, forced the service to make a hard choice, Baptista said.

In 2021 the Bazilian air force only has “50% of the resources to pay the financing of the KC-390 and the Gripen”, he says. Faced with a choice between a larger fighter fleet and its domestically-developed KC-390, the service chose future purchases of the F-39E/F.

Changes to the Brazilian air force’s buying plans could be a mixed bag for Embraer, which is involved in the domestic production of the F-39E/F. The existing 36-aircraft acquisition deal includes in-country production of 15 examples of the fighter, in partnership with Embraer, with the rest of the fleet to be built by Saab in Sweden. It also includes a technology transfer agreement to train more than 350 Brazilian engineers and technicians in Sweden on the fighter’s manufacturing.

It is not clear what share of the larger 60- to 70-aircraft order would be built in Brazil. Embraer did not immediately respond to a request for comment.

The KC-390 programme has struggled over the past 12 months. In April 2020, Embraer’s joint venture agreement with Boeing to sell the aircraft worldwide collapsed. At the time, the US company was reeling from the economic fallout of the coronavirus pandemic and the grounding of the 737 Max airliner.

Embraer has maintained that it will be able to handle the transport’s global sales without Boeing and has numerous international sales campaigns ongoing. The company also says its production capacity for the KC-390 has not diminished.

In addition to the now-smaller aircraft order from Brasilia, Embraer has five aircraft on order from the Portuguese air force and two aircraft from the Hungarian air force. It is also trying to convert 33 letters of intent into firm orders from Argentina, Chile, Colombia, the Czech Republic and aviation services firm SkyTech, according to Cirium fleets data.