Future US Navy fighter will not be joint effort with USAF

After developing the Lockheed Martin F-35 Lighting II together, the US Navy (USN) and the US Air Force (USAF) are parting ways.

The USN’s next-generation fighter won’t be jointly developed with the USAF. That’s because the USN does not plan to use its Next Generation Air Dominance (NGAD) aircraft on penetration missions in highly-contested air space as the USAF aims to do with its next-generation fighter, says Angie Knappenberger, USN deputy director of air warfare, at the Navy League Sea-Air-Space conference in National Harbor, Maryland. 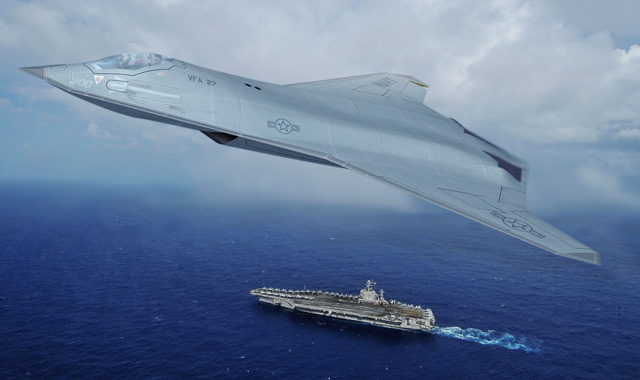 “A penetrating fighter, the Navy doesn’t have to do that. So some of that inherent design of the aircraft it does drive costs and if you don’t need that for our mission area then you don’t necessarily want to pay for it,” she says, noting the shape of a highly stealthy penetrating fighter, presumably without a vertical stabliser, would be more expensive to develop. Instead, the USN would conduct penetrating airstrikes against an advanced adversary with long-range standoff missiles or the mission would be deferred to the USAF, says Knappenberger.

That’s not to say that the two services’ next-generation fighters won’t share systems, such as electronic warfare, radar, networking and weapons systems.

“Where we really get some dividends is all of the complimentary systems that we are going to have,” says Knappenberger, adding that borrowed weapons could be especially beneficial. “Anytime we partner with the Air Force and get a bigger stick that’s a big thing.”

The USN’s NGAD is also likely to share systems with the F-35B and F-35C, says Knappenberger.

Yet, the USN isn’t quite ready to call its NGAD a sixth-generation fighter.

“Sixth generation isn’t really something that we are using. Our [analysis of alternatives (AoA)] has really gone after capabilities and how those capabilities contribute,” says Knappenberger, explaining that the AoA report was just finished. “We expect the results of the AoA later this year.”