The US Department of State has approved a possible Foreign Military Sales deal to supply six Boeing P-8I maritime patrol aircraft to India for an estimated cost of $2.42 billion.

The US Defense Security Cooperation Agency (DSCA) says it delivered the required certification to the US Congress on 30 April. 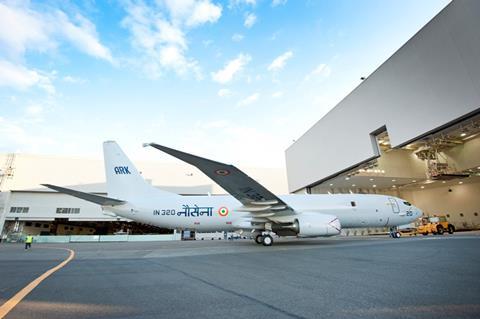 As part of the proposed sale, India would also buy a number of subsystems, some seemingly intended for previously ordered examples of the P-8I. The Indian navy bought eight P-8I aircraft in 2009, and contracted for four more in 2016.

“This proposed sale will support the foreign policy and national security of the United States by helping to strengthen the US-Indian strategic relationship and to improve the security of a major defensive partner, which continues to be an important force for political stability, peace, and economic progress in the Indo-Pacific and South Asia region,” says the DSCA.

The $2.42 billion estimated cost is on the highest end of what New Delhi would pay, as Foreign Military Sales approvals account for a range of equipment options which are not ultimately included in the final purchase agreement.

The sale of the additional P-8Is to India is also not certain, as the country’s government may not give final authorisation. However, if the sale did go through, India would have 18 examples of the maritime patrol aircraft and become the 737NG-based jet’s second largest operator behind the US Navy (USN). The USN has 109 examples of its P-8A Poseidon in service, with another 18 on order, according to Cirium fleets data.

The P-8 is designed to conduct long-range anti-submarine warfare, anti-surface warfare, and intelligence, surveillance and reconnaissance missions. It has a bomb bay that can drop sonobuoys and torpedoes, as well as hardpoints on its wings for anti-ship missiles. The Indian navy has also used the aircraft to conduct search and rescue missions, including dropping a survival kit and inflatable life raft from the jet.

India’s position between the Arabian Sea, Indian Ocean and Bay of Bengal makes it a strategically important player in tracking the movements of submarines and ships, in particular those of China. The country also sits alongside vital shipping lanes between the Middle East and East Asia.

Though not a treaty ally of the USA, India is a partner of increasing importance due to its population of 1.4 billion people and its fast-growing economy. It is also part of the Quadrilateral Security Dialogue, known popularly as “the Quad”, an informal group of four nations that also includes Australia, Japan and the USA, which periodically hold diplomatic talks.

In addition to the Indian navy and the USN, the P-8 is operated by the Royal Australian Air Force and the UK Royal Air Force. The Royal New Zealand Air Force, Royal Norwegian Air Force and South Korean navy have also selected the P-8A as their next maritime patrol aircraft.