The Boeing KC-46A Pegasus tanker programme got off to a bumpy start in 2019. Delivery stoppages because of foreign object debris and three category one deficiencies put the already-late programme on an even more delayed schedule. In 2020, Boeing is hoping to put at least some of the aircraft’s problems behind it and maybe even score another foreign military sale for the tanker – international sales are vital to the programme’s profitability as it tries to make up nearly $3.6 billion in total losses.

Boeing is playing catch-up on its original delivery schedule. It was on contract to deliver the first 18 fully capable aircraft by August 2017. Instead, it delivered 18 KC-46As by August 2019 and the tankers were not fully capable, hobbled by deficiencies and difficulties obtaining US Federal Aviation Administration (FAA) certification of the aircraft’s Cobham-made aerial refuelling pods. 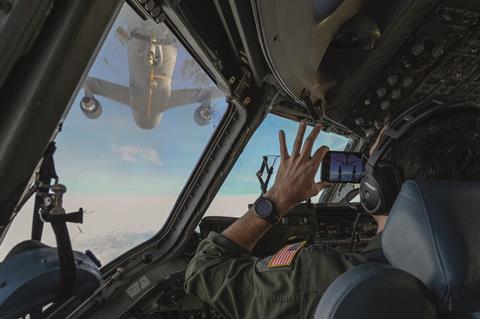 In an effort to get back on schedule, the company has pushed to deliver three to four aircraft per month in 2019. The company plans to decrease its delivery rate in 2020 when it has caught up to its original timetable.

The aircraft’s three category one deficiencies include problems with its boom camera, called the remote vision system, which sometimes displays an image that is washed out by light changes or becomes distorted; issues properly connecting its refuelling boom to lighter aircraft, such as the Fairchild Republic A-10 Thunderbolt; and cargo pallet locks that can work loose in flight.

The refuelling boom problems are not Boeing’s fault and stem from poor instructions given to the manufacturer from the US Air Force (USAF). However, the company is to blame for the remote vision system and cargo locks. It is fixing those issues at its own expense.

Boeing says it has a retrofit solution for the faulty cargo pallet locks and could have the problem fixed “soon,” although it has declined to give a timeline. The company is aiming for a preliminary design review of the KC-46A’s remote vision system in the early part of 2020 and a critical design review towards the end of 2020. The airframer also believes the Cobham pods should receive FAA certification by June 2020.

Despite lingering issues, the USAF is eager to bring the KC-46A into service as soon as possible. It moved the aircraft into initial operational test and evaluation in October. The tanker should be approved, retrofitted and introduced into service by 2022 or 2023, the service has said.

Boeing is on contract for 67 tankers with the USAF. The US Department of Defense programme of record for the aircraft is 179 KC-46As.

However, international sales of the KC-46A are critical if Boeing is to make up losses. So far, these have been sparse, with the Japanese air force only ordering two aircraft, the first of which went into assembly in September 2019.

Boeing had hoped that the United Arab Emirates (UAE) would buy the KC-46A, but those dreams were dashed when that country’s air force announced at the 2019 Dubai air show that it was to order three more Airbus Defence & Space A330 multi-role tanker transports (MRTTs). The UAE already flies three A330 MRTTs, but Boeing was hoping the country would split its fleet.