The US military has left Afghanistan nearly 20 years after invading the country, with the last Boeing C-17 flight of American service members departing Hamid Karzai International airport in Kabul on 30 August at 23:59 local time. 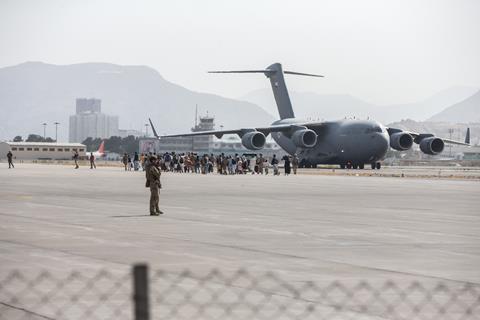 “No air traffic control or airport services are available,” the notice says. “Aircraft operating into, out of, or through Kabul FIR and landing OAKB should use extreme caution. Aircraft should adhere to standard reporting procedures on CTAF 125.2.”

The last two US citizens on the ground were Major General Chris Donahue, commander of the US Army’s 82nd Airborne Division, and Charge d’Affaires Ross Wilson, the senior diplomat in Afghanistan.

The USA and a coalition of NATO allies invaded Afghanistan just weeks after Al Qaeda, hosted by the ruling Taliban at the time, carried out attacks on the World Trade Center towers and Pentagon on 11 September 2001. The Taliban were vanquished from the country relatively quickly and replaced by a democratically elected Afghan government.

Yet, despite billions of dollars in assistance and two decades of training by Western militaries, the Afghan government and its army were racked with corruption, in-fighting and incompetence. After the USA and its allies began pulling troops from the country earlier this year, the Afghan army started to rapidly disintegrate. In just a few months a resurgent Taliban captured almost all of the country, including the capital Kabul by 15 August.

The US military over the past two weeks was forced into an awkward truce with its former enemy to allow evacuations of US citizens, allied Afghan civilians and citizens from other countries. Evacuees made their way to Hamid Karzai International airport where US Air Force transport aircraft flew them out of the country.

Hamid Karzai airport was secured by roughly 5,000 US service members and 500 Afghan soldiers, who with their families were eventually evacuated as well. After a member of the terrorist group Islamic State of Iraq and the Levant – Khorasan Province (ISIS-K) exploded a suicide bomb on 26 August outside of the airport, killing at least 169 Afghans and 13 US service members, the Taliban agreed to provide security around the airport’s perimeter.

The USA hopes to get Hamid Karzai airport up and running again so that civilian aircraft can continue to fly out a few hundred Americans that remain in the country as well as potential Afghan evacuees. US Secretary of State Anthony Blinken said on 30 August that the Taliban has committed to continue to allow people to leave. Blinken says the US Department of State will work with allied countries to facilitate continued evacuations using charter flights.

Toward that end, McKenzie says the US military did not destroy pieces of equipment at Hamid Karzai that are necessary for airport operations, such as firetrucks and front-end loaders.