The 500th example delivered is an F-35A that will serve with the Vermont Air National Guard, says Lockheed. An image of the jet shows it bears the registration number AF5343. 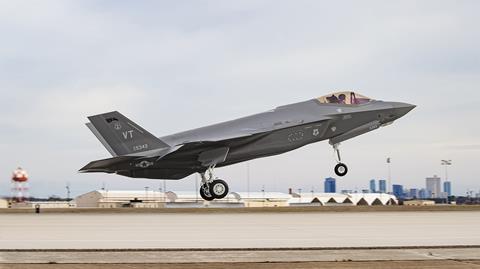 The 500th F-35 delivered will go to the Vermont Air National Guard.

The 250,000hr mark includes aircraft used by the USA and international customers for testing, training, and operations.

“These milestones are a testament to the talent and dedication of the joint government, military and industry teams,” said Greg Ulmer, Lockheed Martin, Vice President and General Manager of the F-35 programme.

“The F-35 is delivering an unprecedented 5th Generation combat capability to the warfighter at the cost of a 4th Generation legacy aircraft.”

Though the programme is hitting its stride it still suffers from issues. In January, the Department of Defense’s Office of the Director of Operational Test & Evaluation released a report to congress stating that the F-35 has 873 deficiencies.

“Although the programme is working to fix deficiencies, new discoveries are still being made, resulting in only a minor decrease in the overall number of deficiencies,” said the report.