Raytheon Technologies is projecting that the US Air Force’s (USAF) selection of its Long-Range Standoff Weapon (LRSO) design will be worth about $10 billion to the company over the life of the programme.

The company sees the programme as a valuable long-term franchise, it says on an earnings call on 7 May. 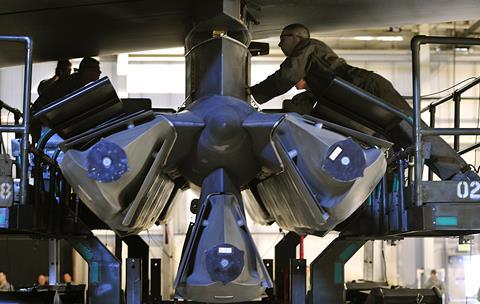 The USAF gave Raytheon a sole-source contract in April for the LRSO, ending the missile development competition early. Lockheed Martin was also competing to design and build the missile. Each company was awarded $900 million in 2017 for the development effort.

The LRSO is a stealthy, nuclear-tipped cruise missile intended to replace the service’s AGM-86 Air-Launched Cruise Missile (ALCM). The ALCM is planned to remain in service with the USAF through 2030.

Raytheon had anticipated beginning contract negotiations with the USAF for the LRSO’s engineering and manufacturing development phase in fiscal year 2021. It expects to sign a contract in FY2022.

Winning a large defence programme such as LRSO is welcome news to Raytheon amid coronavirus-caused difficulties within its commercial aviation business. The defence-focused Raytheon Company merged with commercial aviation-focused United Technologies a few weeks earlier, on 3 April.

“We expect sales to be down significantly at Pratt and Collins,” says Toby O’Brien, chief financial officer of Raytheon Technologies on the earnings call. “We see [second-quarter] operating profit at Pratt to be a loss and operating profit at Collins to be approximately breakeven.”

In the first quarter of 2020, costs related to spinning off elevator company Otis and heating company Carrier helped push Raytheon Technologies to a $83 million loss, down 106% year-on-year. To a lesser extent, costs related to coronavirus safety measures also contributed to the loss in the first quarter. First-quarter sales were down 1% year-on-year to $18.2 billion. Those sales included revenue generated from Otis and Carrier, but not Raytheon Company.

The Raytheon Company generated revenue of $7.2 billion in the first quarter, rising year-on-year by 6.5%. It made a profit of $1.19 billion for the period, rising 7.1% year-on-year.

Raytheon Technologies holds about $8.5 billion in cash and approximately $25 billion in debt.