One dead, two injured in US Navy E-2 crash

One sailor was killed and two injured when their US Navy E-2D Hawkeye command and control aircraft crashed in the waters off the coast of Chincoteague, Virginia.

The Northrup Grumman-made aircraft and its crew were assigned to an Airborne Command and Control Squadron on the US East Coast according to a statement from the navy. 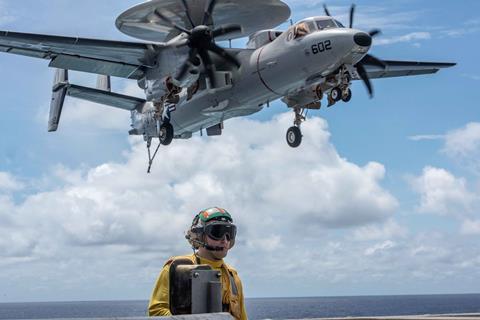 The cause of the crash was not immediately clear. It occurred around 19:30 local time on 30 March near Wallops Island.

Rescue of the two injured sailors was affected by Maryland State Police, and they are reported to be recovering from non-life threatening injuries. The third crew member was found deceased in the wreckage of the aircraft by a dive team from a local fire department.

The navy says an investigation into the incident is under way.

The twin propeller E-2D Hawkeye is used by the navy as an airborne command and control platform. Northrop describes the aircraft as a “digital quarterback” that can be used for battle management, airspace and missile defence, and surveillance operations.

It normally carries a full crew of two pilots and three systems operators.