Aero Vodochody rolled out its first L-39NG jet trainer on 12 October, four years after the Prague-based company announced that it was to launch a new-generation version of its single-engined design at the Farnborough air show in July 2014.

Manufacturing of parts and sub-assemblies started in 2017, with pre-serial production having commenced in January and the NG's first flight expected before year-end.

"I am glad to see Czech industry is back in the aviation scene," Czech Republic Prime Minister Andrej Babiš told an audience of around 300 people at the launch event, held at its Odolena Voda facility. "Aero Vodochody aircraft were always used by the Czech army, and I suppose it will be the case with this new-generation aircraft." He adds: "I will personally support Aero Vodochody to ensure this aircraft is a success and will ensure my fellow ministers will do the same.”

His statement went some way to confirming that state-owned LOM Praha will get the go-ahead to order the L-39NG in the near future. One source told FlightGlobal that LOM Praha's flight training centre – which supports the instruction of Czech air force pilots – is expected to order four examples, with an option for two more. 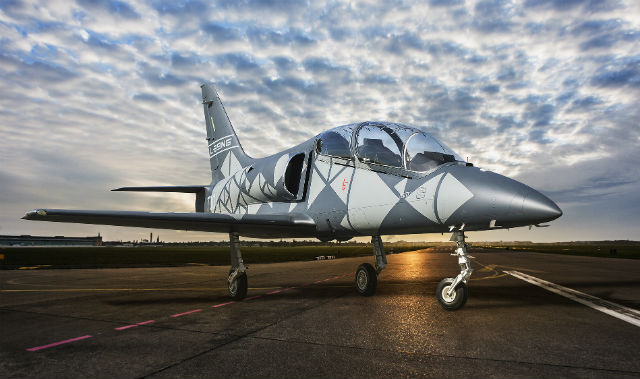 Securing a deal to help train its home nation's pilots will strengthen the manufacturer's international sales efforts with the new version.

At July's Farnborough air show, Aero Vodochody signed letters of intent with two customers for the L-39NG. Lisbon-based SkyTech made a financial commitment to acquire 10 aircraft, with an option for six more. Phoenix, Arizona-based RSW Aviation signed for a dozen new-build aircraft, and to upgrade its existing six L-39s to Aero Vodochody's re-engined CW standard. Both operators plan to dry-lease the trainers to support air force training.

SkyTech vice-president Laurent Donnet tells FlightGlobal: "We are not going to build up a school. We are going to make a jet pilot training capability available to air forces, and if they have a school we will deliver them to their school." He is keen to stress that this strategy would not place the company in direct competition with Aero Vodochody for customers. "We can only do this in co-operation with the OEMs. We have had a lot of interest from potential customers in working this way."

Asked when SkyTech will formalise its 16-aircraft contract with the manufacturer, Donnet says: "We were going to sign in November, but we are postponing and should sign by the end of the year." He indicates that the operator is likely to have an eventually larger requirement for the type.

In addition to these LOIs, Senegal announced in April that it was to become the first L-39NG customer, with its interest being in four light combat derivatives. Two of the aircraft are expected to be delivered in 2020, and the others the following year.

Selling the light combat version before formalising sales of its trainer model came as a surprise to many observers, but not Aero Vodochody chief executive Giuseppe Giordo. "I wasn’t surprised: the difference between us and the competition is our capability of integrating new weapons for customers and not telling them what they can have.

"The Senegal deal is a massive one," Giordo says. "It’s a big trust by everyone, to order the aircraft which hasn’t even flown yet."

One of the most significant changes the L-39NG brings over the company's legacy L-39 Albatros is the introduction of a Williams International FJ44-4M turbofan engine, in place of its previous, Ukrainian-supplied AI-25.

Aero Vodochody engineers helped to develop the -4M version of the Williams powerplant, with the activity having seen its L-39CW prototype acting as a testbed and accumulating around 200h of flight-testing with the civilian-standard FJ44-4A.

Speaking about the -4M development several weeks before the roll-out event, L-39NG designer Radomir Lang explained: "It is a bit more robust than the FJ44-4A, to cope with the high g-loads during aerobatic manoeuvres. Williams worked gaps between the blades and completely changed the exhaust pipe for our requirements. As a result, they have increased the thrust level of the engine for military use." The engine manufacturer describes the product as being in the 3,600lb-thrust (16kN) class.

For most of this year, the L-39CW has been undergoing upgrades, including receiving new avionics destined for the L-39NG, such as its Genesys 6 x 8in multifunction displays. The asset resumed its flight-test programme in early August and is working with the prototype to ensure the new trainer can achieve certification before the end of 2019. First deliveries are expected in the third quarter of 2020.