The Royal Australian Air Force’s 3 Sqn has received its first Lockheed Martin F-35A: the service's first example not earmarked for use at the Luke AFB International Pilot Training Centre.

This is the RAAF’s ninth F-35A, with the others being used to training at Luke, says Australia’s Department of Defence. 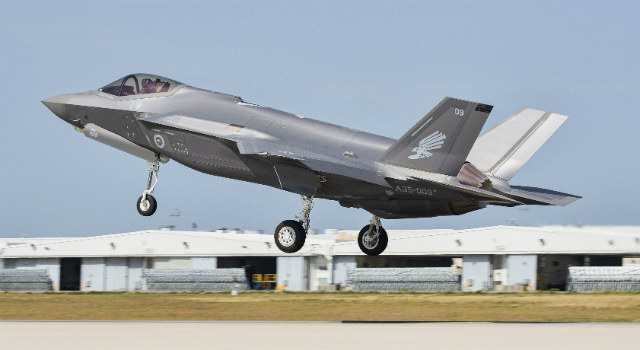 "It is an exciting time for Air Combat Group as we transition to F-35A operations over the next few years,” says Air Commodore Michael Kitcher. “While there are challenges ahead, particularly as we prepare for the conduct of Australian-based operations next year, I am confident we are well placed to manage the transition."

The RAAF accepted the jet, A35-009, at Luke AFB in early September. No. 3 Squadron operates the Boeing F/A-18 A/B “Classic” Hornet, which the RAAF will retire.

It follows the first dropping of ordinance from another RAAF F-35A, A35-006, on 20 July. The activity took place at the Barry M. Goldwater Range in Arizona, and saw the F-35 drop two inert GBU-31v3 JDAM GPS-guided bomb which scored direct hits on their targets.

The RAAF aims to achieve initial operating capability with the type in December 2020. IOC will include weapons such as the Raytheon AIM-120 AMRAAM medium-range missile, AIM-9X Sidewinder missile, JDAMs, small diameter bombs, and the internal 25mm cannon.

Australia operates 55 single seat F/A-18As and 16 two-seat F/A-18Bs that were acquired in the 1980s. This fleet will be retired by 2022 in favour of the F-35A, of which Canberra has committed to acquiring 72 examples.

Canada will obtain up to 25 surplus RAAF F/A-18 A/Bs, of which 18 will be used to fill a capability gap while Ottawa decides on its next fighter aircraft. Seven will be used for non-flying activities such as software testing, static training, and spares.