Canada’s Department of National Defence plans for the aircraft to reach initial operational capability by fall 2020, it says on 6 June. The contract is worth C$105 million ($78.6 million), including the two aircraft, as well as initial training and spare parts. 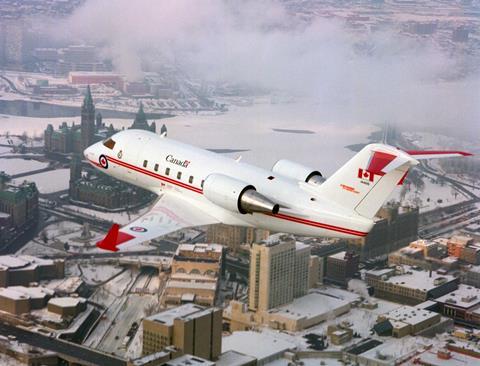 The new aircraft are to replace two aging Challenger 601 models.

“The retiring aircraft that entered service in the 1980s, fall short of operational requirements and are nearly obsolete due to new rules in the United States and Europe that will restrict their ability to fly internationally before the end of this year,” says National Defence.

The RCAF’s Challenger fleet also includes two Challengers purchased in the early 2000s. Within the service, the aircraft is designated the CC-144 Challenger.

National Defence says it has been working on finding replacements for its aging Challenger aircraft since 2018.

Canada has used its Challenger fleet in a utility role for a variety of missions, including international reconnaissance, liaison missions with foreign countries, medical evacuation of military personnel serving overseas, repatriation of personnel and citizens, as well as transportation of parliamentarians and the British Royal family.

The Challenger 650 has a maximum range of 4,000nm (7,400km) and can carry up to 12 passengers. National Defence notes that one of its Challengers recently carried a crew of Royal Canadian Navy search experts to Naples, Italy to support the search for a Sikorsky CH-148 Cyclone helicopter that crashed in the Ionian Sea in April.

The deal to buy two Challengers is a small boost to Bombardier, which has struggled amid the coronavirus-induced economic recession. In order to cut costs, the company announced plans on 5 June to lay off 2,500 personnel.