As part of that test, six modified Boeing GBU-39 Small Diameter Bombs were dropped simultaneously from two Lockheed Martin F-16s, says the Air Force Research Laboratory (AFRL) on 26 May. The bombs established communication with each other and with a ground station, and received instructions mid-flight. They then autonomously swarmed and hit two targets. 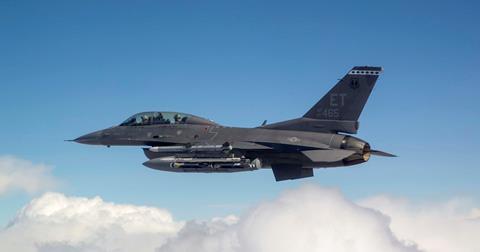 In this final test, the programme aimed to show it could expand the radio network from four weapons to six weapons and a ground station.

“This demonstrates the ability of the L3Harris Banshee 2 radio network to scale up the number of nodes required to accomplish the mission,” says AFRL. “The second objective sends an in-flight target update from a ground station to the flight weapons to engage a new high-priority target.”

The in-flight target update demonstration is intended to show Golden Horde weapons can connect to the larger battlefield network that the US Department of Defense is developing, called the Joint All-Domain Command and Control (JADC2) system.

“The JADC2 linkage is a key capability for future [networked, collaborative and autonomous] weapons, and one the team was particularly focused on implementing,” says Norma Taylor, the Collaborative Small Diameter Bomb programme manager.

With initial Golden Horde testing complete, the AFRL is shifting its focus to “Colosseum”, a software simulation environment that will create digital twins of weapons – a virtual clone of a real-world weapon used for simulations. The laboratory aims to more rapidly test, demonstrate, improve and transition collaborative autonomous networked technologies using the software simulation programme.

The Golden Horde programme only has tested the Collaborative Small Diameter Bomb. That weapon, based on the GBU-39/B Small Diameter Bomb, is a 110kg (250lb) munition with pop-out wings that allow it to glide more than 40nm (75km) to a target.

It appears that Colosseum would be used to create collaborative versions of various conventional weapons, likely including other bombs, cruise missiles and loitering munitions. It is unclear if collaborative technology would be integrated into new weapons or retrofitted, like the Joint Direct Attack Munition kit that converts unguided bombs into precision-guided weapons.

The USAF is hailing the Golden Horde as the next big thing in air-launched weapons.

“These technologies are completely changing the way we think about weapon capabilities, much like the laser-guided bomb did several decades ago,” says Major General Heather Pringle, AFRL commander. “Golden Horde and technologies like this will enable the Department of the Air Force to overcome many of its current and future challenges, and we’re just beginning to unfold all the possibilities.”