At its Northern Edge 21 exercises in Alaska, the US Air Force (USAF) tested the Boeing F-15 conducting an electronic attack to clear a path for a Lockheed Martin F-35 stealth fighter.

The test reveals how the USAF may use its legacy fleet of F-15E Strike Eagles, as well as its new F-15EX Eagle IIs, in coordination with its stealth aircraft for air strikes deep into enemy territory. The F-15 used the BAE Systems ALQ-250 Eagle Passive Active Warning Survivability System (EPAWSS). 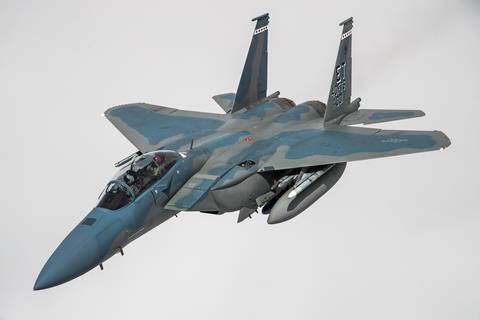 The demonstration, which took place on 14 May, was done to help evaluate a tactic improvement proposal that came out of the service’s annual Weapons and Tactics Conference, the USAF said on 17 May. The tactic is part of an effort to minimise “the F-35’s emissions to get closer to the adversary”, the service says. Electronic emissions would betray the stealth aircraft’s location.

“As a fifth-gen asset we have stealth, so we can physically get closer, but we may not have all the weapons that a fourth-gen aircraft, like a [F-15E] Strike Eagle, does,” says Major Scott Portue, an F-35 pilot with the 422nd Test and Evaluation Squadron. “We’re trying to figure out how we – fourth- and fifth-generation platforms – can benefit each other so that we can get closer to the adversary.”

The service adds that, for the first time ever, on 14 May, a tactical formation of four F-15Es flew equipped with EPAWSS. It is not clear if the tactical formation was directly related to the F-15E’s electronic attack support of the F-35, though the flights happened on the same day. 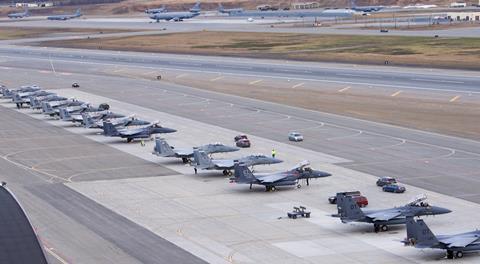 The USAF plans to acquire 144 examples of the F-15EX to replace its ageing F-15C/Ds, which on average are 37 years old and reaching the end of their useful lives. The service received the first F-15EX fighter from Boeing in March and plans to operate the type into the 2040s.

EPAWSS is designed to monitor, jam and deceive threats, such as radar-guided missiles, in contested airspace. In March, BAE received a $58 million contract to start low-rate initial production of EPAWSS for the USAF.

Systems like EPAWWS rely on a database of known electronic emissions from adversaries’ weapons and sensors to identify and then counter threats. For example, a system would identify a surface-to-air missile battery’s radar frequency and then use already-developed electronic warfare techniques to jam or interfere with it.

To avoid detection and jamming, adversaries can change the electronic emission characteristics of their radars. That forces their opponents to update their catalogue of known threats and come up with new electronic attack measures.

Rapid adaptation to new threats and electronic signatures is increasingly important to the USAF. The service notes that at Northern Edge 21 BAE was able to reprogramme the mission data files for EPAWSS to improve its performance within one to two days.

In March, the USAF revealed in a sources sought notice that it was researching adding “cognitive electronic warfare” capabilities to the F-15. The service is looking for artificial intelligence and machine learning “algorithms to advance the capabilities of airborne electronic warfare systems in development and production” for the type. It did not specifically mention EPAWWS.

Cognitive electronic warfare aims to use artificial intelligence and machine learning to quickly and automatically identify new signals coming from an adversary’s radar. In the future, an aircraft’s on-board computer might even be able to swiftly come up with a countermeasure.

The F-15’s use of EPAWWS to support penetrating strikes by the F-35 come as the Cold War-era fighter is also being tested to carry more long-range weapons. In May, the USAF demonstrated that an F-15E could carry five Lockheed AGM-158 Joint Air-to-Surface Standoff Missiles (JASSMs); more than double its current capacity. The stealthy JASSM has a range of 200nm (370km).

Adding long-range electronic attack and missile capabilities to the F-15 appear to be intended to keep the fourth-generation fighter relevant against adversaries such as China and Russia which are fielding a growing number of sophisticated surface-to-air missiles and stealthy aircraft.