The US Navy’s (USN’s) Boeing P-8 Poseidon patrol aircraft have a new weapon in their arsenal – one that can deliver submarine-hunting torpedoes from high above the ocean’s surface.

Boeing in August won a full-rate production contract for the High Altitude Anti-Submarine Warfare Weapon Capability (HAAWC) – a kit that turns a standard Raytheon Technologies Mk-54 torpedo into a precision-guided munition that can be launched from high altitude. 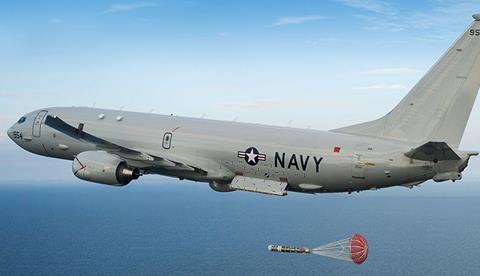 The USN declared initial operating capacity (IOC) for the HAAWC programme on 22 November, signifying the service has enough weapons and training on the system for it to be at least minimally ready for operational deployment.

“The [IOC] milestone marks the readiness of HAAWC for fleet introduction for the navy and its international partners,” says Boeing programme manager Dewayne Donley. “We’re excited to deliver greater flexibility and capability by way of higher-altitude launches from longer distances than previously possible.”

The P-8 serves multiple roles in the USN, including maritime patrol, search and rescue and anti-submarine warfare. To engage an undersea vessel with the standard Mk-54 torpedo, a P-8 must descend to no higher than 100ft above the sea, and drop the weapon in close proximity to an enemy vessel.

The HAAWC modifies the Mk-54 with a set of folding wings and guidance system, essentially transforming the torpedo into a precision-guided missile. A HAAWC-modified torpedo can launch from the P-8’s cruising altitude and glide to a designated targeting area using GPS.

Once near its target, the weapon jettisons its wings and uses a parachute to slow before entering the water. When underwater and in proximity to a submarine, the Mk-54’s onboard guidance system can autonomously guide the torpedo to its target.

“The HAAWC system provides flexibility by allowing the navy to carry out anti-submarine operations throughout the full flight envelope of the P-8A,” says Donley.

Boeing notes the HAAWC enables the Poseidon “to deploy Mk-54 torpedoes from near or below its cruising altitude”, which is around 30,000ft. The P-8 is based on a Boeing 737 commercial airframe.

Developing and fielding so-called “stand-off weapons” such as the HAAWC is now a major priority for the Pentagon. Military planners expect the ability to launch precision guided weapons, while keeping friendly aircraft out of range of enemy fire, will be critical to victory in any conflict against the People’s Republic of China.

Recent war games conducted by the Center for Strategic and International Studies indicate that LRASM in particular will be a key capability if the USA hopes to defend Taiwan against an invasion from mainland China.