The US Navy (USN) has successfully completed an airworthiness test of a radio frequency countermeasure pod prototype on a Boeing P-8A Poseidon maritime patrol aircraft. 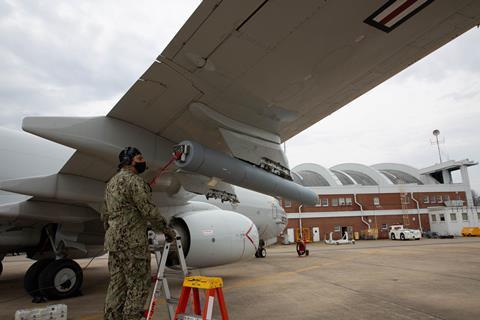 The countermeasure prototype is based on BAE Systems’ ALE-55 fiber optic towed decoy, but in a different pod shell. The shell is based on the Boeing AGM-84 Harpoon anti-ship missile, which already has an airworthiness certificate with the Poseidon.

It took just a little over a year to get the pod into testing, says the USN. The countermeasure is designed to protect the P-8A from radar-guided surface-to-air missiles.

In addition to using parts from existing systems, the service fast-tracked the development of the new decoy by relying on an Other Transactions Authority contract, a sort of government contract that has fewer regulations and a streamlined process.

The USN plans to continue testing the countermeasure pod before working on additional aircraft integration and then a fielding phase.

The P-8A is the USN’s premier surface ship and submarine hunting aircraft. It carries a small arsenal of anti-ship missiles and torpedoes.

Decoys, such as the ALE-55, are towed behind an aircraft and jam incoming radar-guided missiles. As a last resort, the decoy will mimic the radar cross-section of the aircraft being protected in a ploy to draw away an incoming missile.

BAE, as well as Raytheon, was selected by the USN in 2019 to develop and demonstrate competing versions of a dual-band towed decoy for the service’s Boeing F/A-18E/F Super Hornet fleet. BAE put forth an upgraded version of the ALE-55 for the competition.

Correction: The article was changed on 13 April to note that the ALE-55 put forth by BAE for the US Navy’s F/A-18E/F dual-band towed decoy was an upgraded variant.