US Special Ops look for parachute to deploy above 25,000ft for standoff missions

The US Army Airborne and Special Operations communities are looking for improvements to the RA-1 Advanced Ram Air Parachute System which would allow paratroopers drop from aircraft flying at altitudes greater than the current 25,000ft limit.

The US Army Contracting Command made known its interest in parachute upgrades via a 7 January request for information notice, posted online. 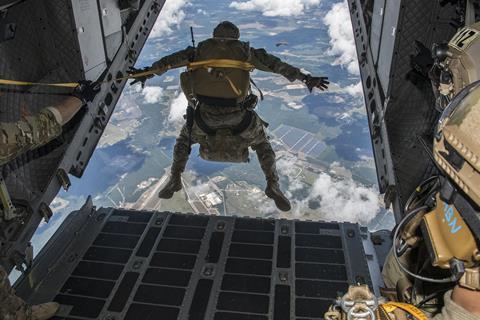 “The Army is interested in canopies that can be deployed at a minimum jumper weight of 360 pounds at increased exit speed and altitudes not to exceed 35,000ft [mean sea level],” the service says. It adds that the system would be used for “high-altitude standoff personnel parachute operations”.

The ability for a parachute to deploy from a higher altitude would give it a greater glide range, also known as standoff, allowing aircraft to drop paratroopers from distances further away from dangerous surface-to-air missiles on the ground. Greater range also gives the military a greater selection of landing sites, making it more difficult for the enemy to predict where soldiers are massing and what their potential objectives might be.

The RA-1 is relatively new to the US Army, reportedly first being used in 2014. Compared to its predecessor, the MC-4 parachute system, it boasts improvements in glide performance, canopy handling and weight carrying capacity, according to manufacturer Airborne Systems.

The steerable parachute has a glide ratio of 4:1 and can carry up to 204kg (450lb). The canopy’s stabilisers are also designed to be quieter than previous systems, making the parachute stealthier, says Airborne Systems. 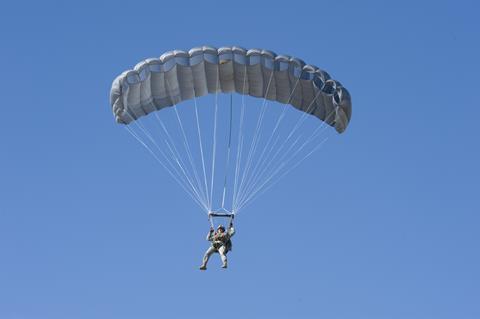 For its new high-altitude parachute variant, the US Army wants canopy designs that are currently at a Technical Readiness Level 6 or higher, a stage where manufacturers are ready to demonstrate a prototype. The improvements must integrate into the existing RA-1 parachute system, the service says.

The ability to drop troops and equipment from aircraft and glide into a landing zone is increasingly of interest to the USA’s armed forces and allies. For example, Yates Electrospace is manufacturing an unmanned cargo glider, the Silent Arrow GD-2000, that can carry a gross weight of 907kg (2,000lb) with a glide ratio of 8.4 to 1, which translates to a standoff range of 64.4km (40mi).