Israeli carrier Arkia is configuring its long-range Airbus A321LR with 220 seats, giving the airline around a 3,300nm range with the twinjet type.

Arkia is the first customer to receive the A321LR, taking delivery of its initial aircraft during a ceremony at the Airbus Finkenwerder plant in Hamburg on 13 November.

The aircraft (4X-AGH) is powered by CFM International Leap-1A engines.

“They know their market, know the people travelling with them,” he says. Arkia opted for a larger galley space, with trolley capacity, to offer more on-board service.

“They’re enjoying the flexibility of the cabin,” says Navallon. 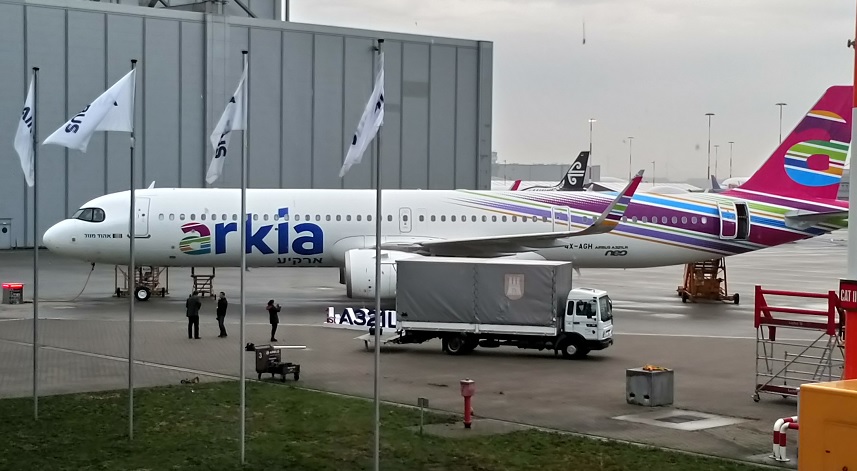 While the A321LR has the capability to operate over a 4,000nm range with 206 passenger, he says that Arkia’s higher payload will give its aircraft a range of about 3,300nm.

But this is sufficient, he points out, to reach target markets from Tel Aviv identified by the Israeli carrier, including Paris, Zanzibar and southern India.

Navallon says the A321LR has been developed to reach routes which the A321 was unable to access, notably in the transatlantic, south-east Asian and Australian regions.

“[It] was really looking at those market opportunities, to tap that kind of market,” he says.

Arkia was formerly an operator of Boeing 757-200s, the aircraft at which Airbus has taken aim with the A321LR.

Navallon claims the aircraft offers a 30% per-seat fuel-burn reduction over the 757 and a 31% cash operating cost saving per seat. Seven of the 10 largest 757 operators are already A321 customers, he adds.

Arkia is one of 10 disclosed future operators of the A321LR. Others include Air Astana, Azores Airlines, Aer Lingus and Air Arabia – who are taking theirs through Air Lease – plus TAP Portugal, Norwegian and Peach.

Air Transat will receive the A321LR through an AerCap lease while Air Busan is taking the type from Aviation Capital Group.