Swiss regional carrier Helvetic Airways has deferred delivery of seven Embraer 190-E2s that were due to join its fleet this year.

The airline, which recently took delivery of its fifth E2, says the remaining seven will now arrive “from 2021 onwards”.

Helvetic will resume scheduled flights from Bern to Palma on the Spanish island of Majorca on 5 July, along with services from Zurich to Pristina in Kosovo and Ohrid in Macedonia. 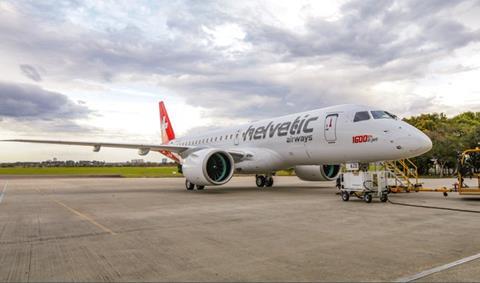 Starting on 18 July, the airline will serve Majorca from Bern and Sion on behalf of FlyBair. Crete and Rhodes will also join the network from mid-August, followed by Jerez, Kos, Menorca and Preveza from September.

“Europe may have reopened its internal borders, but the situation remains very uncertain,” states Helvetic Airways chief executive Tobias Pogorevc. “Things are slowly starting to happen again, but it’s still very unclear just how much demand there is for air travel.”

Pogorevc adds that the carrier will gradually increase capacity over the next few months, depending on demand.