India’s Directorate General of Civil Aviation (DGCA) has processed the deregistration of seven Boeing 737-800s, while it has received requests to deregister 13 more aircraft.

The deregistered aircraft correspond to two 737s managed by Avolon and five from MC Aviation Partners for which requests were made last week.

Nitin Sarin, managing partner at Indian law firm Sarin & Co, tells FlightGlobal that although the deregistration has been processed, there are still a number of steps involved before lessors can export their aircraft.

“The government agencies/airport operators are to send in their dues within a stipulated period of time, after which the lessor is to pay, on payment the DGCA shall give its permission to export and thereafter the lessor may export. These stages after deregistration are still pending,” he says.

Requests to deregister a further 11 737-800s and two -700s were lodged on 9 April by lessors Avolon, Aviation Capital Group and BBAM. 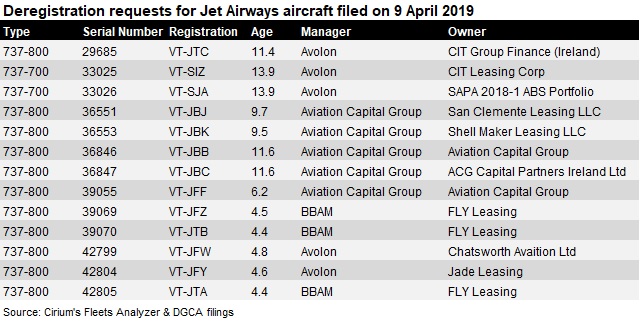