Mexico's Interjet has grounded more than two-thirds of its Sukhoi Superjet 100 fleet, with dozens of engines out of service as the airline remains locked in talks with Sukhoi over the withdrawal of the aircraft.

Fifteen of Interjet's 22 SSJ100s are in storage while only seven aircraft remain in service, Cirium's Fleets Analyzer shows. The stored aircraft were parked as early as April 2018, although about half of the 15 aircraft went into storage in the second half of 2018. Since the year began, Interjet has parked two more SSJ100s, the database shows.

Sources familiar with the situation say Interjet wants to sell its SSJ100 fleet back to Sukhoi, but is deadlocked in talks with the manufacturer, who wants the airline to keep operating the aircraft.

Dozens of PowerJet SaM146 engines are out of service as Interjet has not paid for engine repairs, say sources who spoke on condition of anonymity. "Threats are exchanged, but no solution is visible," a source tells FlightGlobal. PowerJet did not respond to questions from FlightGlobal.

Interjet, which is Mexico's third largest airline, did not respond to repeated requests for comment. The airline took delivery of its most recent SSJ100 in July 2016, Cirium Fleets Analyzer shows. It has eight SSJ100s on order but it is not immediately clear if those aircraft will be delivered. 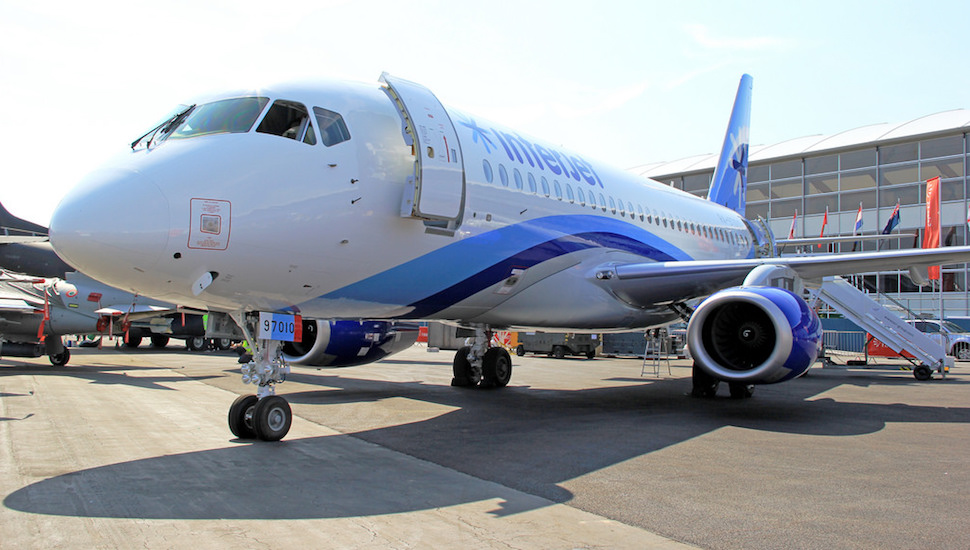 A spokesperson from Sukhoi Civil Aircraft (SCAC) says in response to queries from FlightGlobal: "We continue our cooperation with Interjet."

She adds that SCAC is "ready to propose to Interjet various solutions to facilitate their fleet optimisation and increase its effective operations". The airline is evaluating its proposals, says the SCAC spokesperson.

SuperJet International, which is majority-owned by Sukhoi and responsible for marketing the SSJ100 to Western customers, did not respond to requests for comment.

Interjet's grounding of several aircraft mark the latest stage in the years-long unravelling of SSJ100 operations at the Mexico City-based airline, which took delivery of its first SSJ100 in 2013 and had placed orders for 30 aircraft.

The airline's former chief executive, Jose Luis Garza, had called the order a "sweet deal", saying that the capital cost of 10 SSJ100s was about equal to the pre-delivery payment for one Airbus A320. Interjet is a majority Airbus A320 family operator, with an in-service fleet of 61 A320 family narrowbodies.

But a string of mechanical issues over the years had forced the airline to take SSJ100s out of service, culminating in the airline receiving almost $40 million in compensation for contractual recovery of maintenance costs in the second quarter of 2018.

The airline's SSJ100 capacity has declined in the recent year, as more SSJ100s moved into storage. Capacity operated with the SSJ100 is down 46% this month from a year ago, Cirium schedules data show. Interjet operates the aircraft to two dozen destinations, most of which are within Mexico.

Interjet announced in September 2018 that it planned to phase out "some" of the SSJ100s, after denying a FlightGlobal report earlier that month that it was in talks with Sukhoi to sell its SSJ100 fleet. SuperJet International told FlightGlobal in October 2018 that it was offering cabin densification and fuel-saving winglets to the Mexican airline, and denied plans for Interjet to sell its SSJ100s back to Sukhoi.

In January, the carrier appointed William Shaw as its new chief executive, replacing Garza who had led the airline for 14 years, indicating a change in direction for the airline under fresh leadership.

A question mark is hanging over the future of the airline's SSJ100 fleet as the aircraft withdrawal weighs upon the airline's expenses. In its fourth quarter 2018 financial statements, Interjet says a 21.2% increase in operating expenses was partly driven by the gradual phase-out of the SSJ100 fleet.

The Mexican airline is not the only Western operator to be trimming SSJ100 operations. Irish regional carrier CityJet operated its last SSJ100 flight in January and has stored its seven SSJ100s, amid reports that it plans to return the aircraft to Sukhoi.