The New York-based airline's decision was announced hours after the Bombardier CSeries was rebranded under Airbus ownership earlier today.

The A220 order comprises firm orders for 60 aircraft, with deliveries to start in 2020, and another 60 options for delivery from 2025. JetBlue will take all A220-300s, previously known as the CS300, from an assembly facility in Mobile, Alabama, it says. That site has not yet been constructed.

JetBlue's long-awaited decision concludes a fleet review that it began in early 2017, targeted at the future of its 60-strong E190 fleet. The airline's choice of the A220-300 is a blow to Embraer, which was marketing the E195-E2 to the carrier.

"While the E190 has played an important role in JetBlue’s network since 2005, the airline’s fleet review determined that the A220’s economics would allow the airline to lower costs in the coming years," says JetBlue.

The 130- to 160-seat capacity of the A220 provides advantages over the 100-seat Embraer configuration, it adds. 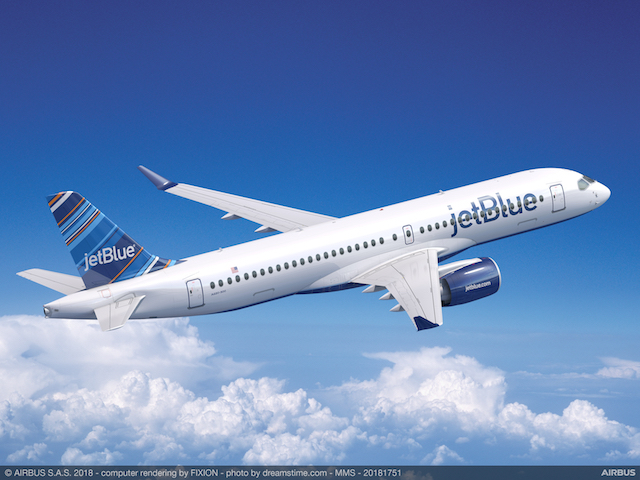 “We are evolving our fleet for the future of JetBlue, and the A220-300’s impressive range and economics offer us flexibility and support our key financial and operating priorities,” says JetBlue chief executive Robin Hayes.

"As we approach our 20th anniversary, the A220, combined with our A321 and restyled A320 fleet, will help ensure we deliver the best onboard experience to customers and meet our long-term financial targets as we continue disciplined growth into the future."

The airline says that the A220's range and capacity will give it greater flexibility in its network strategy, including transcontinental service and growth in focus cities.

JetBlue's E190 fleet will begin departing the fleet in 2020, the same year when the A220s begin arriving. The airline estimates that the E190 phase-out will complete in 2025.

The carrier says it has flexibility to convert "certain aircraft" to the smaller A220-100 if it requires.