'New' name for Ryanair 737 Max is not actually new

While several media reports are claiming that Ryanair has rebranded the Boeing 737 Max, in the aftermath of the re-engined type's grounding, the chosen '737-8200' designation is not new.

Photographs circulating on social media purport to show a Ryanair 737 Max 8 – registered EI-HAY and parked at Boeing's Renton facility – with the 'Max' name no longer on the nose, possibly a response to perceptions that the 'Max' brand is tainted by poor publicity after the fleet was grounded five months ago.

Although the switch is notable, the name – contrary to a number of reports – is not a new designation for the aircraft, and actually predates both the Max grounding and the two fatal accidents which led to the type's suspension from operations.

The European Union Aviation Safety Agency had been referring to the 737-8200 in documents such as its 2015 annual activity report, published in June 2016, almost a year before the first ever 737 Max delivery.

This designation has frequently been included in US federal regulatory filings from Boeing and the US FAA since at least early 2017.

EASA documents on seating capacity and exit configurations for the aircraft – which will have a high-density layout compared with the regular Max 8 – also specifically referred to the variant as the 737-8200 when they were published for comment last year. 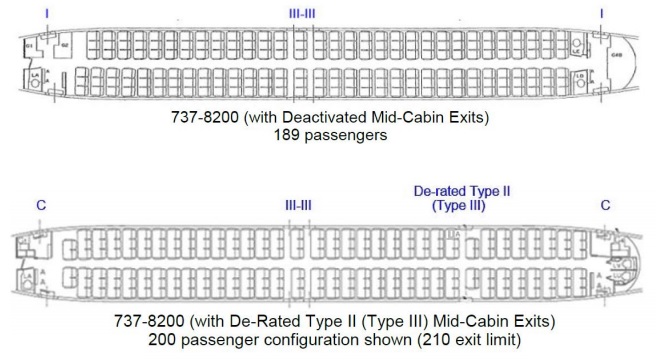 Ryanair is intending to take its version of the aircraft, which was also previously known as the 'Max 200', with a 197-seat layout.

There is no immediate evidence that other 737 Max operators are similarly changing the name of the aircraft on the fuselage. The '-8200' designation would only apply to Ryanair and other users of the high-density variant. Asian low-cost carrier VietJet has also signed for this version while Russian budget operator Pobeda has shown interest in converting to the type.

Other operators of the Max fitted in standard configurations have typically received aircraft with the name '737 Max 8' or '737 Max 9' on the fuselage. There is no immediate indication that customers are moving to adapt these designators, although they could conceivably follow the Ryanair example and use the variants' formal '737-8' or '737-9' identifiers.