PICTURES: BEA A319 to be next British Airways retrojet

The next British Airways aircraft to appear in a retro livery will be an Airbus A319 in the colours of British European Airways.

Set to enter a paintshop in Shannon this weekend, the A319 retrojet will go into service from London Heathrow during March. This will follow the introduction earlier this week of the airline's first retro-liveried aircraft, a Boeing 747-400 in BOAC colours.

The heritage liveries are being rolled out as part of the airline's "BA100" centenary celebrations this year. 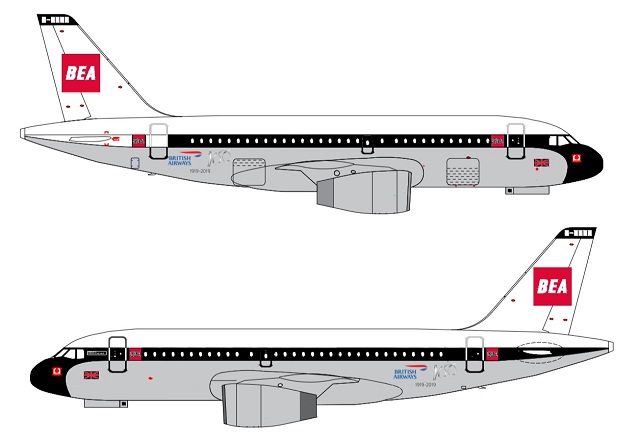 The A319 (registration G-EUPJ) will be painted in the BEA "Red Square" livery which was used predominantly on domestic and European routes between 1959 and 1968. BEA's fleet during that era included BAC One-Eleven and Hawker Siddeley Trident jets, and Vickers Viscount and Vanguard (below) turboprops.

While the top and bottom of wings in the original scheme were red, the A319 will only have red lower wings and the upper surfaces will remain grey to meet current wing-paint reflectivity requirements.

"There's been plenty of speculation about our next heritage livery, so it's great to finally be able to make this exciting announcement," states BA chief executive Alex Cruz. "BEA is an important part of our history, and many customers and colleagues will have fond memories flying on its aircraft."

BA says that more replica designs for its in-service fleet will be revealed in due course, while all new aircraft entering the fleet, including the A350, will continue to receive the current Chatham Dockyard design.